Following the allegations that arose this week, Blessthefall have removed Capsize from their upcoming summer tour. You can view the band’s statement here.

Capsize responded to the allegations on social media, stating they have since parted ways with the member who was accused:

“We are aware of the accusation surfaced last night about the band,” Capsize say in a since-deleted tweet. “The member that has been called out has been removed from our line up. His statement is attached below. That being said, we are going to take some time to regroup and figure out how to move forward. Our upcoming tour is cancelled. We hope everyone finds their own peace.”

The band did not state which member was accused. However, the attached statement reflects the same one guitarist Nick Lopez shared to his personal Twitter account.

“Last year, I had what I thought at the time was a consensual interaction with a woman, until I heard last night that she felt I had pressured her into sex. At first, I felt confused, because every interaction we had after the fact felt normal. After processing it for a moment, I understand that it is not my place to judge whether or not she felt pressured, and if there is any doubt in her mind then I must take her at her word. At this time, I feel that I need to reevaluate what I know about communication and consent, and I should not have a platform to perform music professionally. I’m so sorry for the pain I caused, and I know that I am not the victim here. There is no good way to apologize, but my regret is deep and real and I hope this is a learning moment for me. I will answer questions in my dm’s from friends. Believe survivors.”

Additionally, Holding Absence took to Facebook to address the recent allegations. The band state that they withdrew from the European tour as they believed a safe, welcoming environment was no longer possible. They also state Capsize won’t be joining them for the U.K. portion of the tour with a replacement pending.

“As a band, we pride ourselves on our shows being a welcoming and inclusive space where people are able to enjoy our performance and interact with each other in a safe environment,” Holding Absence say. “We feel that continuing with the tour alongside Capsize would jeopardize this environment.”

Yesterday afternoon, the band were announced as support on Blessthefall’s summer tour. At this time, Blessthefall have not made a statement regarding the allegations against Capsize. Users began tweeting at the band to request they remove Capsize from the tour, and they have stated, “It’s being addressed.”

However, since what is believed to be Lopez’s allegations arose, several Twitter users have come forward with different accounts regarding vocalist Daniel Wand.

A Twitter user who wishes to remain anonymous came forward to share their account with Lopez Thursday evening. They shared, “hey so this is why you shouldn’t fuck with capsize and it took a lot for me to write this out bit they have done this to multiple girls and i cannot stand seeing people support them anymore.”

They then shared a longer statement via an attached image, which reads as follows:

“Hey so it’s been almost a year since this happened but I think I’m finally ready to talk about it publicly. Almost a year ago, I was pressured into having sex with someone from Capsize. I told this person I didn’t want to have sex with them, but they took advantage of the situation and took my clothes off and had sex with me anyways. I’m not gonna say who because I’m honestly scared but this isn’t the first time this person or anyone else in that band has done something like this and I think it’s time to stop supporting this band because they are all awful people and have done this to multiple girls before. This took a lot more for me to talk about so I’m sorry this isn’t eloquent or anything, it’s just something that’s been on my mind a lot. Thank you.” 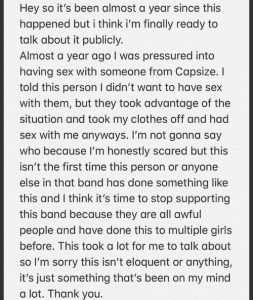 “I honestly have no words for Nick’s apology,” the Twitter user continued Friday afternoon. “I just want to put this behind me and have people be aware of who they support.”

Additionally, the user asked that we include that she and Lopez only had one encounter, despite what it says in his apology statement.

“I’d like to also point out that Nick and I literally never saw each other again after that night,” the Twitter user continues. “He sent me a couple of text messages that I replied to with one worded answers/ignored. So no, there weren’t “multiple encounters” after that one.” 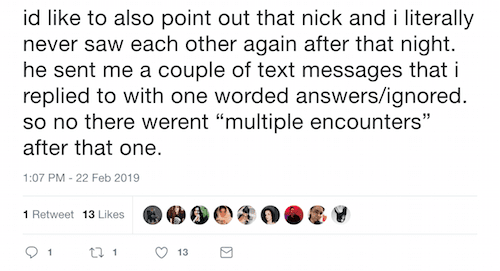 Additionally, a second Twitter user, @pastelwife, gave us permission to share her account. In her statement, she alleges that Wand took advantage of not just her, but multiple women.

The tweet shares two accounts of young women ages 16 to 17. Wand was between the ages of 20 and 23 during these alleged occurrences.

“This is a pattern of bad behavior that should have been addressed a long time ago,” the tweet reads. “We are not doing this for pity or attention. After seeing other girls come forward about their experiences, we finally had the strength to share something we had to work through on our own because at the time this was seen as ‘normal.’ It’s not.”

Daniel Wand from Capsize is a predator and I’m finally not afraid to say something. It’s time to stop supporting this band.

This was hard for multiple reasons and I don’t take it lightly. pic.twitter.com/BhukrdSIT4

In addition to the accounts above, a third user who requested to remain anonymous has come forward with another account regarding an interaction with Wand. 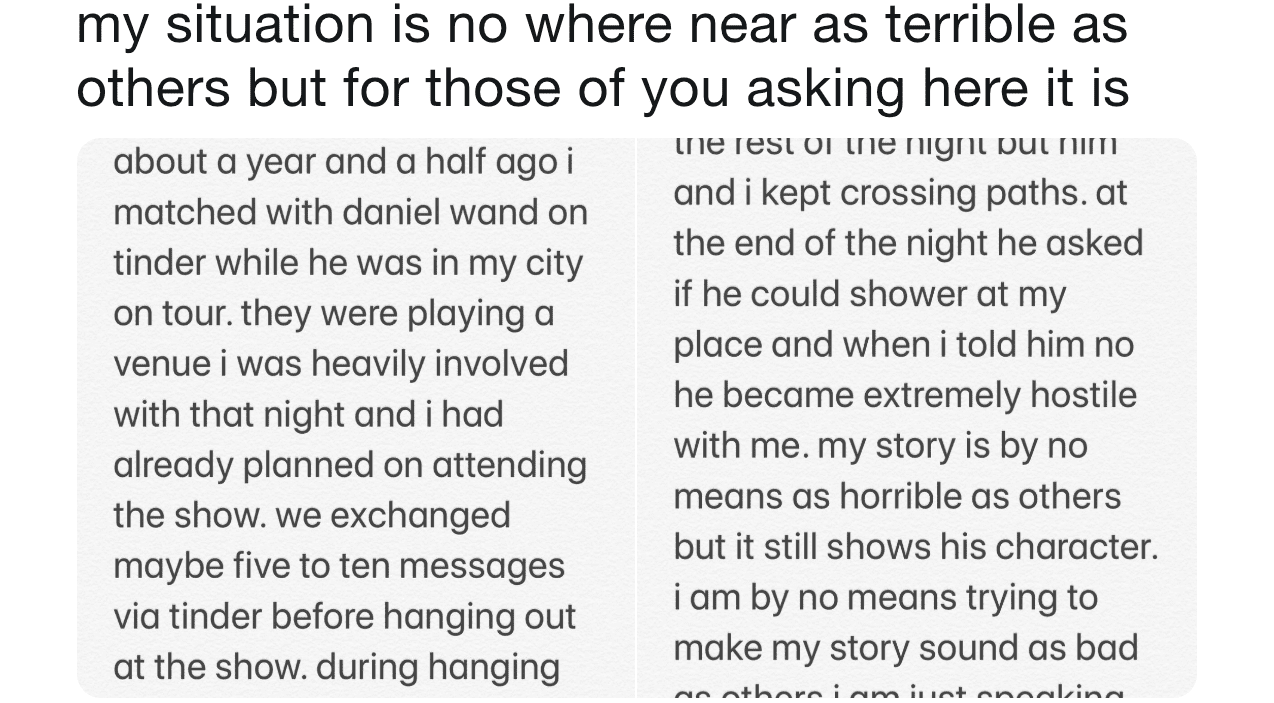 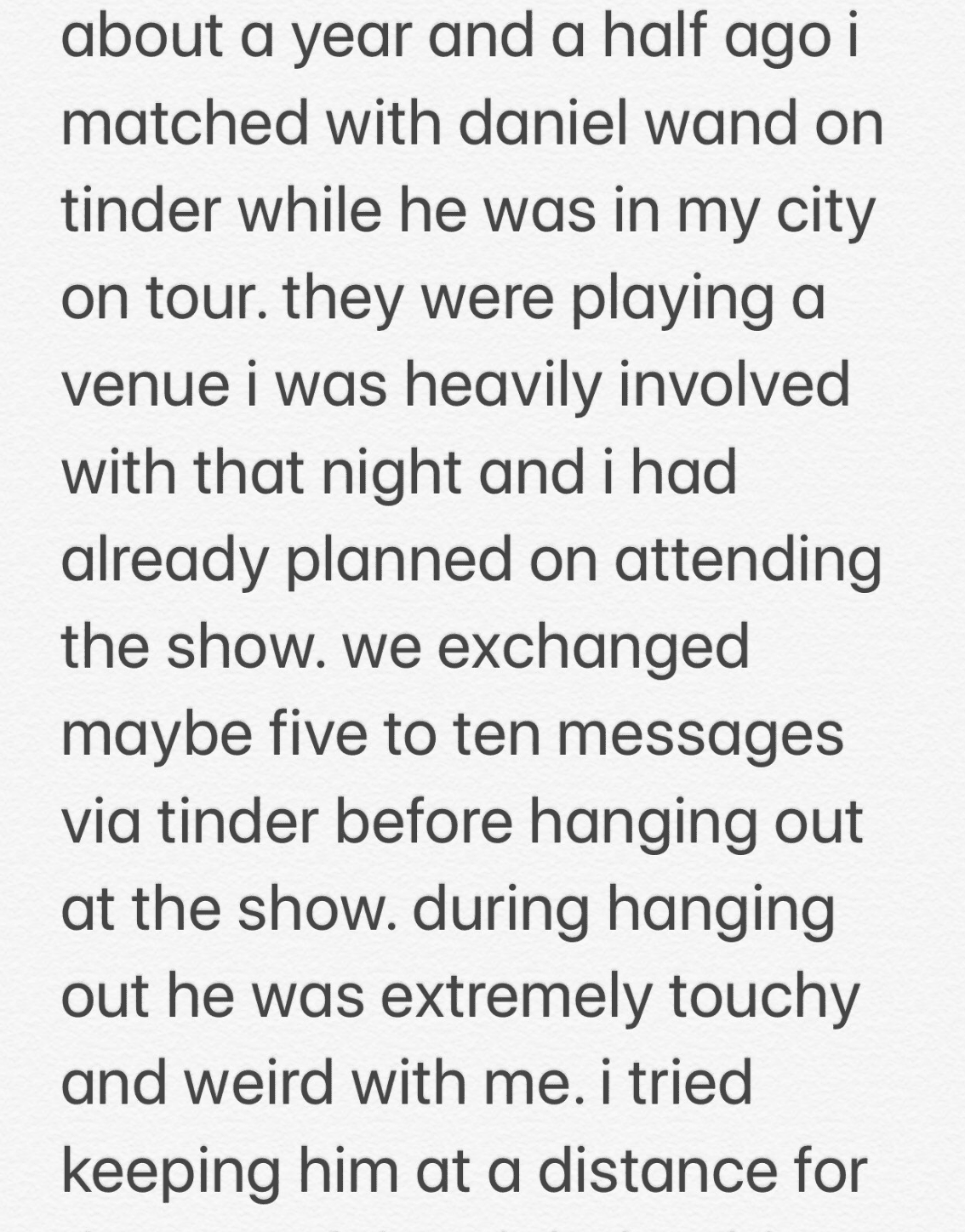 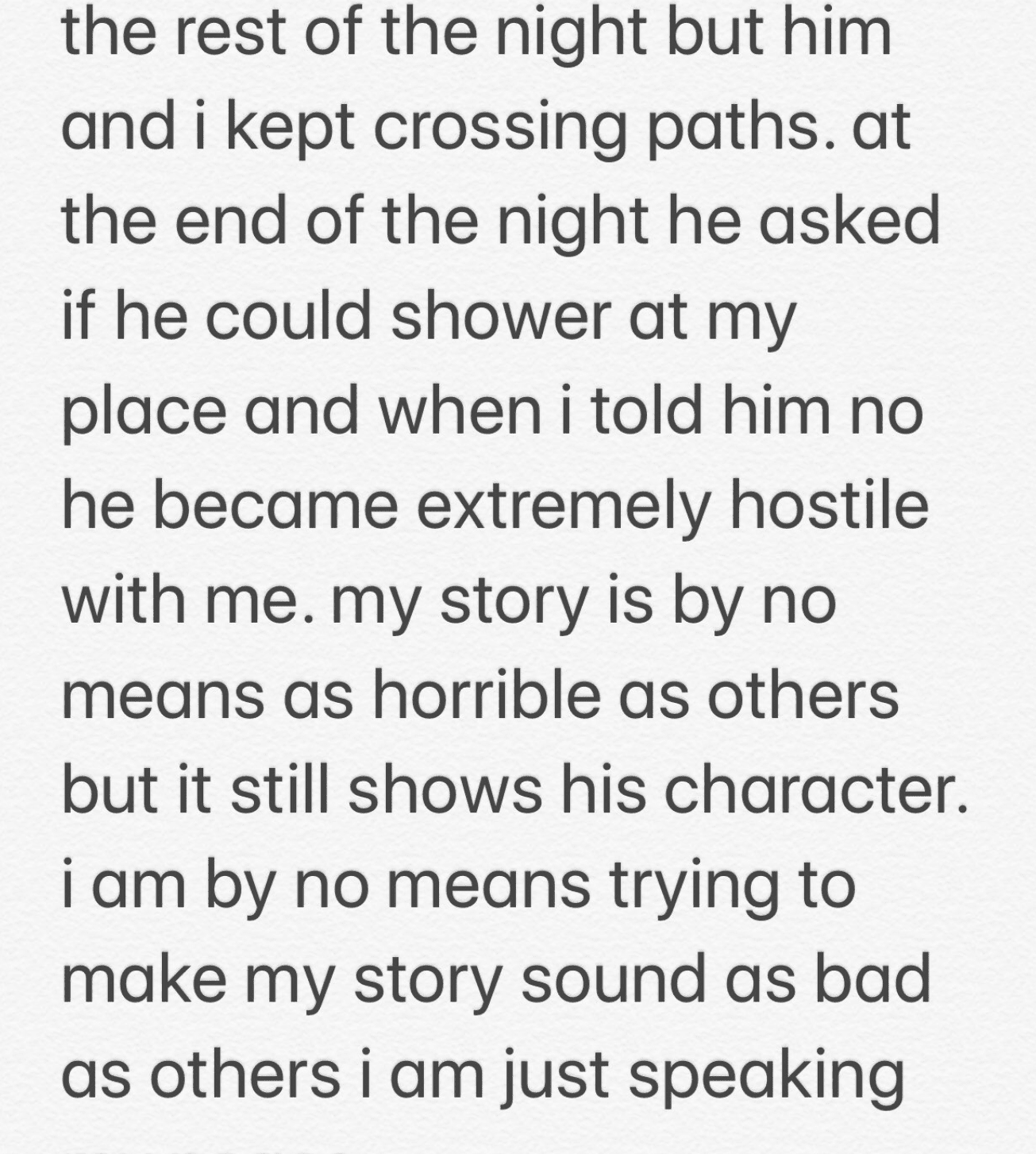 A fourth user who wishes to remain anonymous has also come forward with an account regarding Wand.

Additionally, the corresponding fourth Twitter user added a few more words regarding the allegations. You can read their statement below.

“It’s saddening to come to the realization that there are people in this industry that will use their status to take advantage of their own fans,” the anonymous Twitter user says. “I urge everyone, especially those who are pre-teen to teen age, to be hazardous when meeting your idols. I met Daniel in person when I was 16, and I thought the world of him. Band members can seem flawless in every way hidden behind posters and lyrics, which paints the perfect image that they’ll automatically be the best person you ever meet, especially at a young, impressionable age. However, they are just humans. They’re another stranger. Protect yourselves.”

AP reached out to Capsize’s team for comment, but the band did not wish to make an additional statement at this time.

If you or someone you know has been a victim of sexual assault, there is help to be found. Please consider these online resources:
A Voice For The Innocent –http://www.avoicefortheinnocent.org
Anti Violence Project (serves LGBT) – https://avp.org
National Sexual Assault Hotline – 800.656.4673
National Sexual Violence Resource Center – https://www.nsvrc.org