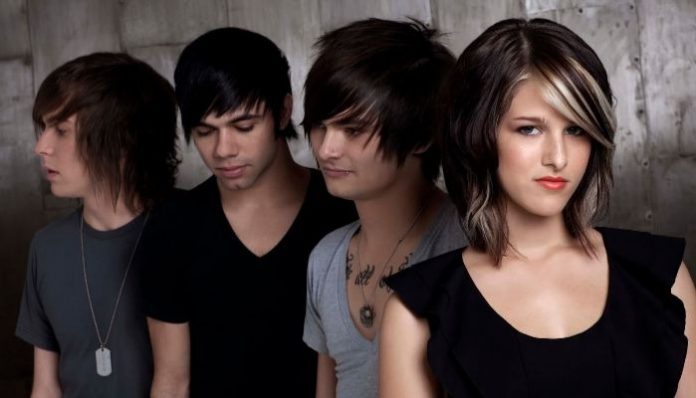 It’s hard to believe it has been 12 years since Hey Monday released their debut album Hold On Tight.

Now, Cassadee Pope is looking back on one iconic music video moment in celebration of the album’s anniversary.

It has been nine years since we last heard new music from Hey Monday. Nevertheless, they are still one pop scene band we hold close to our hearts. Back in 2008, many of us ran to our nearest Hot Topic to swipe a copy of their debut album Hold On Tight. The LP features some nostalgic jams including “Homecoming,” “How You Love Me Now” and “Candles.”

Now, Pope is reflecting back on one iconic music video moment for the Hold On Tight 12th anniversary. On Wednesday, The Voice winner turned country-pop star shared the ultimate throwback moment on Instagram.

She posted a GIF of her major headbang moment during Hey Monday’s “Homecoming” music video. The throwback not only reminds us of this Hey Monday era, but also makes us reminisce about wanting chunky highlights and asymmetrical bobs in the late 2000s.

Read more: Even more photos from that throwback Frank Iero shoot are being released

“I can’t believe it’s been 12 years to the day since Hey Monday released our first album ‘Hold On Tight,'” Pope says. “My life has never been the same. Thank you to the ones who have stuck with me all these years. I think this was my first official headbang in our first official music video so feast your eyes.”

I can’t believe it’s been 12 years to the day since Hey Monday released our first album “Hold On Tight.” My life has never been the same. Thank you to the ones who have stuck with me all these years. I think this was my first official head bang in our first official music video so feast your eyes 😂

Cassadee Pope has openly talked about her time in Hey Monday over the years. Back in March, she exclusively told Alternative Press that the most “punk” thing she ever did was while she was in the band.

“I don’t remember, so that’s punk in itself because I think I had been drinking,” she said. “I believe in Australia when Hey Monday were touring with Fall Out Boy and the All-American Rejects, I think we trashed our green room, and we actually got in trouble for it. [I think] we sprayed soda or chocolate milk or something all over these pipes and drapes, and we ended up staining them.”

She also briefly talked about Hey Monday’s reunion back in 2019 with A Rocket To The Moon. Despite her busy schedule with her solo career, Pope is open to doing more Hey Monday reunions in the future.

“[The Hey Monday reunion] was so fun to do,” Pope says. “I don’t think I would be able to do it with everything I’m doing on my solo project. But we were talking about potentially doing that again [in 2020] or, you know, twice a year or something, because it was that fun. And there are a lot of places [where] we have fans who couldn’t come, so we would love to see them, as well. The door is always open, absolutely.”

Most recently, Pope brought back a Hey Monday classic for her latest release Rise and Shine. She re-recorded a stripped-down rendition of “Hangover,” off of Hey Monday’s 2010 EP Beneath It All.

What is your favorite song off of Hold On Tight? Let us know in the comments below.