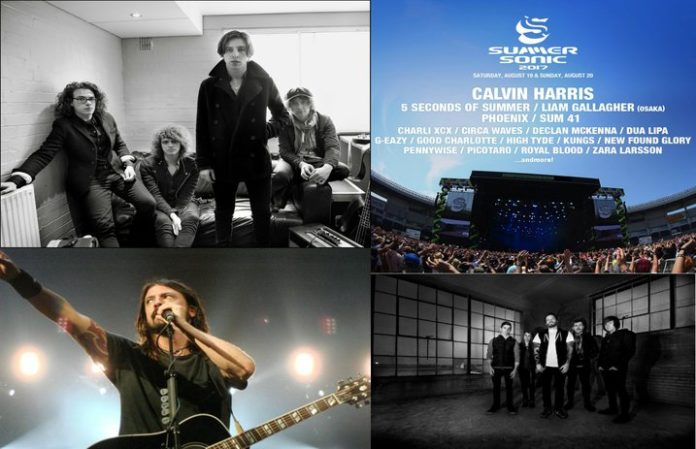 Catfish And The Bottlemen have announced a North American headlining tour and Summer Sonic has released a star-studded festival lineup—not to mention Dave Grohl will be taking part in a unique Grammy performance! Check out the news you might have missed today below!

Read More: Trash Boat to support New Found Glory on U.S. tour and other news you might have missed today

1. Dangerkids have premiered their new video for “Kill Everything.”

Fresh off the release of their sophmore album Blacklist this past Friday, Ohio's Dangerkids have put out their first music video for “Kill Everything,” debuting earlier today over at Billboard.

The rap/rock group noted that they've adapted their sound from many bands from the 2000's of the same genre, but also add that many contemporary acts have influenced their evolution from their 2013 record, Collapse.

Regarding the new video, rapper Tyler Smyth told Billboard, “It crystalizes the moment that we decided to stop listening to other people's advice and to start trusting ourselves. We developed this concept of us as the living dead, something essentially unkillable and unwilling to be stopped, and used that metaphor to fuel the lyrics. The message and upbeat feel made it the perfect introduction to what we affectionately refer to as ‘the new chapter’ for Dangerkids.”

2. Catfish And The Bottlemen have revealed dates for their North American headliner!

Catfish And The Bottlemen have quite the year ahead of them, as the four-piece from the UK will be spending most of their year in the states. The band has newly announced dates for their North American headliner this spring in support of their second album The Ride, which was recently certified Gold in their home country. Tickets for the upcoming tour are available here.

The tour is bound to be a good one as it will feature some unique shows, including a shows at Brooklyn's newest venue Brooklyn Steel, the newly renovated House Of Blues Anaheim, and festival performances at Shaky Knees and Bottlerock. Not to mention their humongous stint with Green Day, which features new dates at Wrigley Field and the Rose Bowl! Very cool for these guys.

Their latest single “7” is climbing alternative radio charts, as it currently sits at #9, and their debut album The Balcony recently was certified platinum in the UK! Check out the group's full list of dates below.

North America! New tour announcement! Tickets on sale this Friday at www.catfishandthebottlemen.com/live See you all soon

A photo posted by Catfish and the Bottlemen (@catfishandthebottlemen) on Jan 31, 2017 at 5:03am PST

3. Dave Grohl will join Anderson .Paak and A Tribe Called Quest in a diverse Grammy performance!

Along with Daft Punk's return to the stage with The Weeknd, Pitchfork revealed today that another super performance group would consist of the Foo Fighters frontman, rapper/singer/musician Anderson .Paak, and A Tribe Called Quest. On the Tribe's new album, .Paak is featured in a song with Jack White, and he's also nominated for best urban contemporary album.

This collaboration sure has fans wondering what these creative musicians have in store, especially on one of music's biggest stages. The 59th Grammy Awards will take place on February 12 at the Staples Center in Los Angeles, and will be broadcast on CBS.

New Found Glory, Good Charlotte, 5 Seconds Of Summer, Sum 41, and more have been announced for an absolutely jam-packed couple of days this coming August.

The festival will take place August 19 and 20. Other featured acts include Circa Waves, Pennywise, and top EDM DJ Calvin Harris, who holds the all-holy headlining spot. But don't worry, the festival poster insists there will be even more acts added.

5. And last but not least, Evanescence is this week's downloadable content on Rocksmith!

The guitar-centric video game is always a fun way to learn to to play your favorite band's songs, and this week the downloadable package will feature three new songs from Evanescence.

“Going Under,” “Everybody's Fool,” and “Bring Me To Life” are all available today on PlayStation Network, Xbox Live, and Steam. You can view the promotional video for the layout and tunings for the songs below.