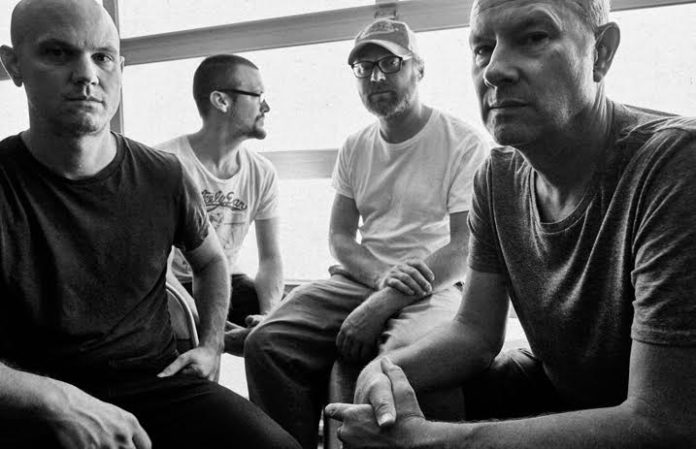 In these cynical times, it’s easy to throw shade at bands who’ve been around a while, long after they’ve ceased to excite or inspire. But Helmet, the idiosyncratic, reductionist metal outfit formed by Page Hamilton in 1989, falls waaay outside that category.

Read more: Davey Suicide dishes on taking his career back and why a lot of tattoo artists have bad attitudes

Helmet’s last album, 2016’s Dead To The World, is murderous, melodic and magnificent, punching the frontal lobes of Generation Xers while still being attractive to new generations of listeners.

“A goal of mine was to always do something that had its own voice,” Hamilton tells Jason Pettigrew on the latest Cautionary Tales podcast. “You can hear Helmet-esque things in people’s music. That was a goal of mine to not do what everyone else was doing.”

After having their debut album, Strap It On, issued by the Amphetamine Reptile label, Helmet were making heads in the American underground swivel. A major-label bidding war for the band soon ensued with Interscope taking the prize, issuing the certified Gold second album, Meantime. (“Interscope were rebels at the time. I wanted creative control: I didn’t want anybody to tell me anything about the music. Don’t tell me what to write about, how to write or how to record. And that was a big thing at the time.”)

After releasing four albums, Hamilton and the original members called it a day, and the guitarist pursued everything from orchestral work to film scores to avant-garde guitar noise to session work (most notably on Nine Inch Nails’ The Fragile). He reactivated the band in 2004 for the album Size Matters and has kept the name rolling ever since over the course of another three releases.

Check out Hamilton’s adventures as he discusses everything from explaining Helmet’s role in the ’90s alt-rock boom alongside Nirvana (like the time both bands performed an Oregon benefit to defeat a 1992 proposition banning gay people from teaching); trying to keep the band together in the early 2000s with a lineup of folks that at one time included Black Veil Brides’ manager; making his first (and only) stint on Warped Tour (learn which post-hardcore notables dropped acid while listening to Helmet!) and walking between Mozart and Beethoven’s apartments.

On Cautionary Tales, Hamilton clarifies his philosophies on life and music. Wait: Apologies for the redundancy. In Hamilton’s world, they are one and the same. “I don’t know how you would do just one thing, buy a mansion on an island and retire and feel like that’s fulfilling. It sounds so corny, but music is its own reward.”

And when you’re done listening, remember: Helmet are blowing up venues across America right now with the fellow NYC metal pugilists Prong. You can always get a cervical collar later if you overdo your headbanging.