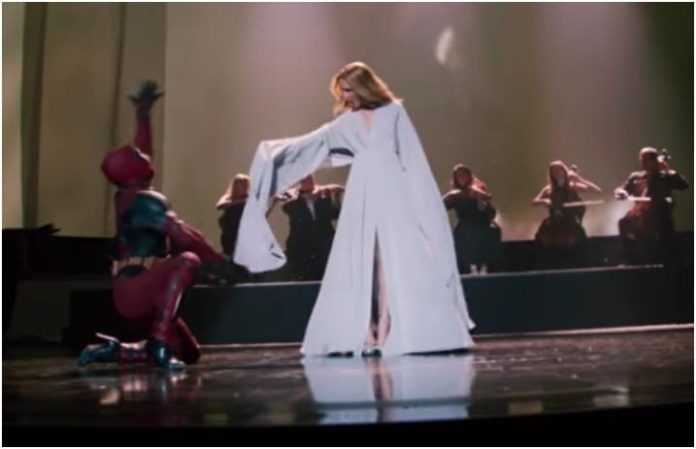 The wise cracking and fourth-wall breaking merc-with-a-mouth will soon be making his appearance in theaters with the release of Deadpool 2, and prior to the film’s debut, fans of the anti-hero are in for a treat with what could possibly be the best music video of the year.

Earlier today we found out that our favorite mercenary would be releasing a soundtrack prior to the release of the Deadpool 2 movie that is set to feature Skrillex, Run The Jewels, and more. As if we weren't excited enough, a music video for one of the songs has been released and to say we're in shock would be a bit of an understatement.

As many fans noted, one of the massive names on the soundtrack is Celine Dion with her track “Ashes.” While we definitely don't mind listening to the legendary performer, we didn't expect to get a music video that features not only Dion, but the merc-with-a-mouth himself.

The music video first shows Dion alone at center stage, singing to an empty theater, when all of a sudden a high heeled-wearing Deadpool comes out of nowhere to perform one of the most epic interpretive dance routines we've ever seen. Of course, this wouldn't be a clip of Deadpool without some snarky comments, and the end of the video shows Wade Wilson's quick wit and Dion's sass.

Dion took to Twitter to share the project, saying: “Over the years I've received incredible songs and I’ve been involved in fun projects. 'Ashes' is 1 of those songs and @deadpoolmovie is off-the-charts!Take the most insane ride of your life when it opens on 5/18! You’ll be laughing your “ashes” off!–Céline xx”

Over the years I've received incredible songs and I’ve been involved in fun projects.Ashes is 1 of those songs and @deadpoolmovie is off-the-charts!Take the most insane ride of your life when it opens on 5/18!You’ll be laughing your “ashes” off!–Céline xx https://t.co/oQdifucwUP

Laugh our “ashes” off we did, watch the video below!

We know from previous trailers of the forthcoming Deadpool movie, after saving the world from the evils of gluten, Wilson has a bigger problem to face: A mutant soldier, Cable (Josh Brolin), has kidnapped a boy. Realizing he can’t do it on his own, he enlists the help of a new epic team that he’s named the “X-Force.”

With the addition of the new soundtrack, we’re even more excited for the new film considering the first Deadpool became the highest grossing rated R film when it hit theaters in 2016. We’re not sure if Wade Wilson and his new team could beat their previous record for highest-grossing rated R film again, but we’re excited to see him attempt.

What do you think of the Deadpool 2 soundtrack? Let us know below!

Be sure to catch Deadpool 2 when it hits theaters May 18.