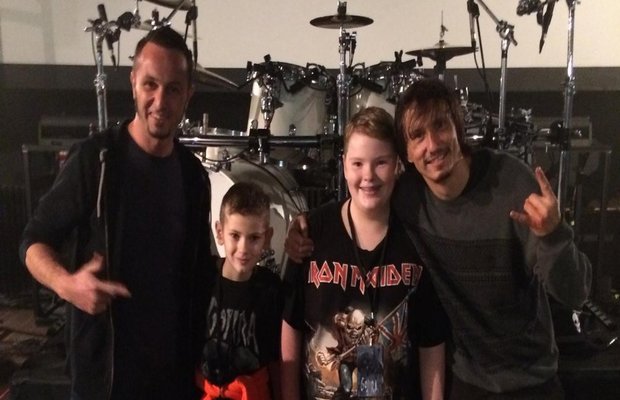 Fancy yourself some thunderous drumming? Well, look no further than French heavyweights Gojira for a powerful dosage of rhythmic genius.

But at their gig in Worchester, Massachusetts last weekend, it was an unexpected star that demonstrated some serious drumming skills. Riley “Steelface” Lee, who is only 12 years old, got to jam on Gojira’s track “Vacuity” with the band’s guitarist, Joe Duplantier, during sound check—and he absolutely rocked it.

The video—which covers the track’s marching intro up until its rigorous blast beats—shows Lee demonstrating some serious potential, and he worked the kit like a pro. Even Gojira’s drummer, Mario Duplantier, approved of the jam, as he can be seen head banging as Lee plays with his brother.

Watch Riley “Steelface” Lee get down under the fog and lights on stage at the Palladium below! Probably ought to keep an eye out to see which band he ends up in, huh?

Watch More: Pierce The Veil show us their tour gifts