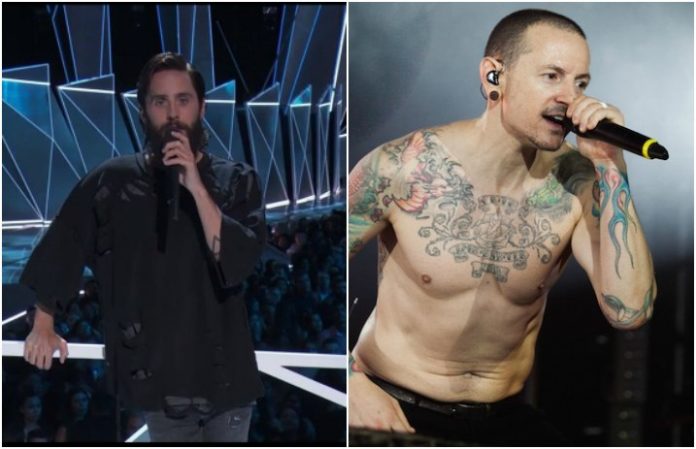 “Chester was my friend, as he was to so many, and witnessing his life taught me important things, especially about working relentlessly, pursuing dreams and being kind and caring while doing it. When I think about him, Chester, I see his face, which was always smiling. I think about his heart, which he wore on his sleeve. I think how kindly he treated me, my brother Tomo, our band. I think about his wife and his six, six incredible children. I think about his family. I think about his band, who were really his brothers, and I remember his voice, at once ferocious and delicate. That voice will live forever. If there's anyone out there watching this who feel there is no hope, hear me out: You are not alone. Reach out. Share your thoughts. Do not give up.”

Too bad they had to cut it off for commercials.

Are you fucking joking!? You cut off a tribute to a truly talented vocalist and musician! @MTV sorry he didn't play the damn space bar!

HOW CAN YOU CUT OFF A CHESTER BENNINGTON TRIBUTE.?!?!?!?! #VMAs pic.twitter.com/dKRVbHjwA8

Leto also had to ask members of the audience more than once to stand up at the end of his tribute.

damn the fact that Jared Leto said he could wait all day asking people to stand up for Chester Bennington's memorial is fucking sad. #vmas