Chiodos have announce that they plan to move forward, not only as a touring band. They will begin creating new music this month. Stay tuned to AltPress.com this week for more information. 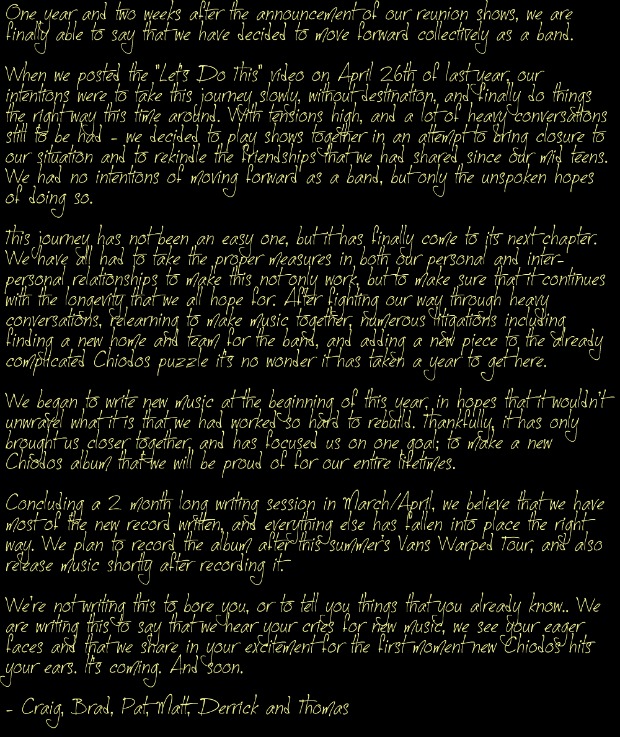 Text:
One year and two weeks after the announcement of our reunion shows, we are finally able to say that we have decided to move forward collectively as a band.

When we posted the “Let’s Do This” video on April 26th of last year, our intentions were to take this journey slowly without destination and finally do things the right way this time around. With tensions high and a lot of heavy conversations still to be had, we decided to play shows together in an attempt to bring closure to our situation and to rekindle the friendships that we had shared since our mid-teens. We had no intentions of moving forward as a band, but only the unspoken hopes of doing so.

This journey has not been an easy one, but it has finally come to its next chapter. We have all had to take the proper measures in both our personal and interpersonal relationships to make this not only work, but to make sure that it continues with the longevity that we all hope for. After fighting our way through heavy conversations, relearning to make music together, numerous litigations including finding a new home and team for the band and adding a new piece to the already complicated Chiodos puzzle, it’s no wonder it has taken a year to get there.

We began to write new music at the beginning of this year, in hopes that it wouldn’t unwravel what it is that we had worked so hard to rebuild. Thankfully, it has only brought us closer together and has focused us on one goal: to make a new Chiodos album that we will be proud of for our entire lifetimes.

Concluding a 2-month long writing session in March/April. We believe that we have most of the new record written and everything else has fallen into place the right way. We plan to record the album after this summer’s Vans Warped Tour, and also release music shortly after recording  it.

We’re not writing this to bore you, or to tell you things that you already know… We are writing this to say that we hear your cries for new music, we see your eager faces and that we share in your excitement for the first moment new Chiodos hits your ears. It’s coming. And Soon.