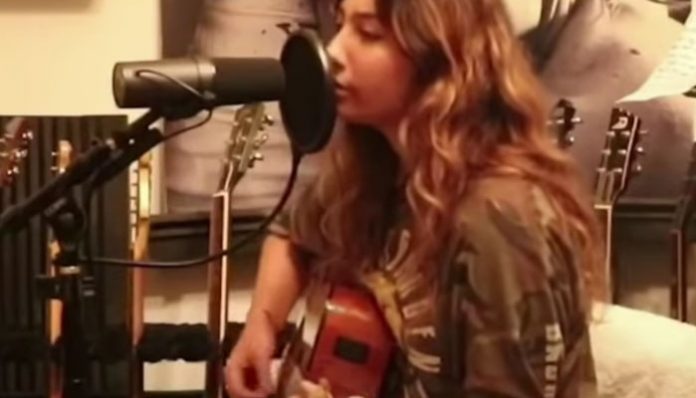 While appearing on LiveXLive’s Music Lives COVID-19 relief benefit, Toni Cornell delivered a poignant version of “Hunger Strike” by Temple Of The Dog. The daughter of the late Chris Cornell covered the song by the Seattle supergroup featuring her father and members of Pearl Jam. The song appears on the band’s 1991 self-titled album.

Cornell was introduced on the show by Matt Pinfield. “I’m sitting in my dad’s studio during this crazy time,” she says after introducing herself. “I’m gonna sing one of my favorite songs for you guys. I love you, Daddy, and I hope I do this some justice.”

The LiveXLive event consisted of two days worth of consecutive livestreaming performances this past weekend (April 17-19). Proceeds from the event will go to the MusiCares COVID-19 Relief Fund, which assists musicians and crew workers affected by the concert industry shutdown.

In March 2018, Toni Cornell donated $20,000 to the International Rescue Committee. The money was derived from sales of her and her father’s version of Prince’s “Nothing Compares 2 U,” which was a hit for Sinead O’Connor in 1990. In an Instagram post from that year, Toni wrote, “Nothing compares to you, daddy. I will keep the promise and always speak out for those who do not have a voice. I am proud and honored to continue your legacy. I love you. I miss you.”

It’s another sterling moment for the artist. Toni released her first solo song, “Far Away Places” in 2019. She’s also performed with One Republic in a tribute to her father and the late Linkin Park frontman Charles Bennington. She truly holds an impressive talent that reflects the same kind of passion that informed the work of her father.