Today Gibson, the classic American guitar manufacturer, has begun worldwide preorders for the limited-edition Chris Cornell Tribute ES-335 guitar. Beginning today, preorders for the tribute model can be made through authorized Gibson dealers.

“Chris Cornell was not only one of the most iconic singer-songwriters of all time, he was a modern innovator who left a legacy that transcends music genres and generations,” Cesar Gueikian, chief merchant officer for Gibson, says. “Chris fell in love with this guitar, and it became a part of his creative expression. It’s our honor to release this tribute ES-335 in his memory. Chris was a special artist, and we hope that this guitar will inspire fans to find their sound and inspiration—just like Chris did—for many years to come.”

The ES-335 Cornell model was originally introduced to the world in mid-January at the Cornell tribute concert “I Am The Highway: A Tribute To Chris Cornell” at the Los Angeles Forum. The event paid homage to Cornell’s legacy while supporting both the Chris And Vicky Cornell Foundation and the Epidermolysis Bullosa Medical Research Foundation, a nonprofit dedicated to raising funding and awareness of the debilitating skin disorder. Working in tandem with the Cornell foundation, the Gibson company made a donation, as well as donating a number of the Cornell ES-335 models for auction to raise additional money for their causes.

Prior to his passing, Gibson worked closely with the late Soundgarden singer with modifications to his original ES-335. Considered one of the company’s most distinct designs, the Cornell signature guitar sports aged Lollartron humbucking pickups and clear “no number” Top Hat knobs on an olive drab satin finish, with Cornell’s signature inlaid in mother of pearl on the peghead.

Check out the guitar below and visit Gibson’s official site for more information. 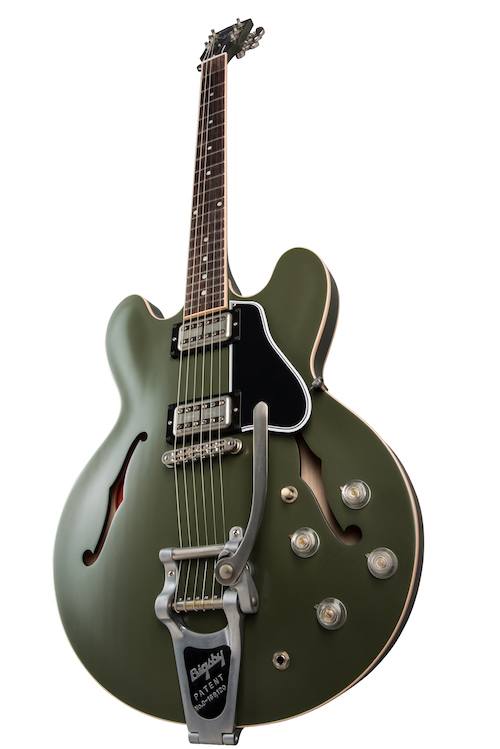