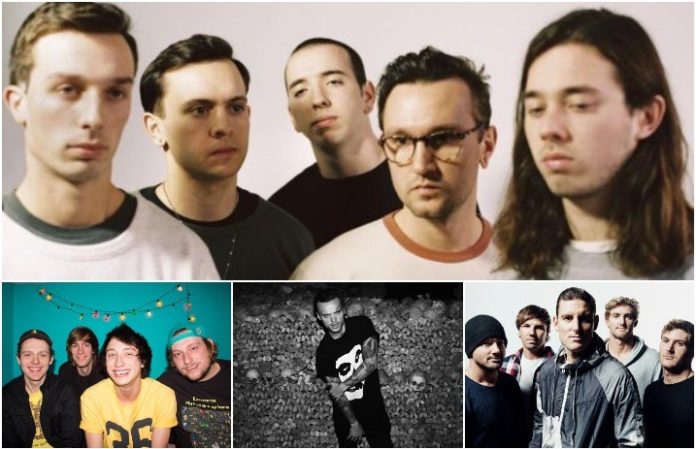 Watch new music videos from Mallory Knox, Thornhill and more—plus, don’t miss Citizen on tour. Check out the news you might have missed today below!

Read more: ‘It’ sequel has a release date, casting in the works

Ohio's own Citizen are going on tour. The band announced the massive U.S. tour with Angel Du$t, Oso Oso and pronoun. The tour will run May 3 to June 6, and tickets are on sale now here!

Parkway Drive have shared part one of their two-part tour diaries video. The band have been teasing the announcement of album six for a few weeks now, and we're pretty excited to see the band's progression on the album in these behind-the-scenes videos and pictures. While we still have to wait to hear any new music, you can always catch the band play some of their classics when they hit the road. For tickets and a full list of dates, be sure to go here!

3. Mallory Knox shared their first music video since the departure from their former vocalist

Mallory Knox have shared their new music video for “Black Holes.” Following last week's news of his departure, the song and video marks the band's first release of new music since the band's vocalist, Mikey Chapman, left the band. The band's bassist, Sam Douglas, will be taking on the role as vocalist for the foreseeable future. You can catch Mallory Knox when they head out on tour, and check here for dates and tickets!

4. Arcade Fire are going to be guests on SNL

Arcade Fire have announced their upcoming performance on Saturday Night Live. The band will play March 17, with Bill Hader as host.

Charmer have premiered their newest single, “Topanga Lawrence.” The single is taken from the band's upcoming album, Charmer, which is out April 20 via No Sleep Records. You can grab your copy of the record here!

Wicca Phase Springs Eternal, aka Adam McIlwee, announced his new five-song EP, Corinthiax, with a music video for the album's title track. The album is due March 16, and you can snag your copy here. The band will also be hitting the road on a few U.S. tour dates, and you can pick up your tickets here!

HEY EVERYONE! We are thrilled to bring you our new single 'Don't Overdose And Drive' via @ruderecords. We have so much more coming for you very soon so jam the new song and be on the look out! https://t.co/EqvBzISc8v pic.twitter.com/x767W1qggi

Happy shared their new song “Don't Overdose And Drive.” You can listen to or buy the single here!

Wisconsin's Barely Civil have shared another new song off of their debut LP We Can Live Here Forever, available March 2. You can get your copy of the album here! The band will also be hitting the road for a few select dates this March, and you can check out the dates below!

9. Vexes premiered a music video for their song, “Decisions Are Death Here”

Experimental rock/metal act Vexes premiered their newest music video for “Decision Are Death Here.” The track is taken from the band's upcoming album, Ancient Geometry, which will hit stores this Friday, Feb. 23. You can get your copy of the album here!

wow. album is finally here! album title and artwork announcement on https://t.co/CY5ojc9z2J for all Coffin Club members! (It’s Free to sign up) IT IS FINALLY HERE. release date and more info coming Tuesday. so emotional and proud of this.

Bohnes announced the release date for his debut album, 206 – Act One. The album is set to be released March 30.

Thornhill shared a new music video for “Reptile.” The song is taken from the band's newest EP, Butterfly, which is out now. You can grab your copy of the album here!

Remember Sports shared their newest single “Up From Below.” The track is taken from the band's third full-length album, Slow Buzz, due out May 18. You can preorder the album here! The band will also be hitting the road, and you can check out the dates below. Pick up your tickets here!

Me Like Bees have shared their newest song, “Long Gone.” The song is taken from their EP, Songs From The Realm, which will be out March 30. You can get your copy of the album here! The new EP is a collaborative effort with Image Comics, acting as a soundtrack of sorts for Image Comics' book The Realm.

14. Written By Wolves released their new video for “Follow Me”

New Zealand rock band Written By Wolves just released a music video for their new song “Follow Me,” which follows up their latest single, “To Tell You The Truth.”