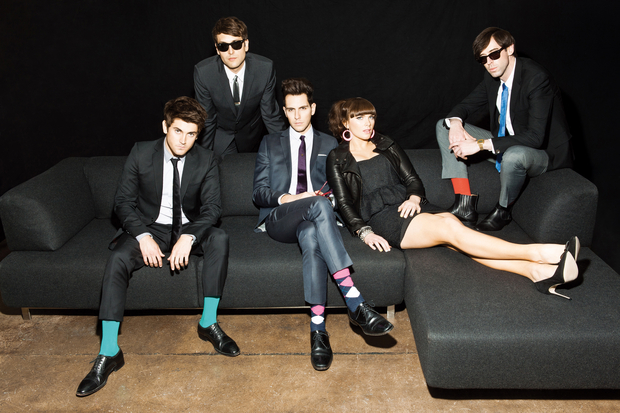 After nearly a decade of blessing us with their infectious dance-pop, Cobra Starship have officially called it quits. Frontman Gabe Saporta broke the news with a lengthy farewell statement on the band’s website. “Looking back on everything, I realize just how grateful I am to have made music for a living,” he writes. “Not simply because I got to (quote-unquote) ‘live the dream,’ but more importantly, because I was able to have such a cathartic lens by which to understand my life; writing was my therapy and shows were my salvation.” Read all of what he had to say below.

Cobra Starship released four full-length albums, one EP and a staggering 17 music videos throughout their time together.

“After many incredible years, I’m making the difficult decision to close the book on Cobra Starship. If you stop reading this now, I want to say thank you if you’ve ever supported Cobras in any way. Whether you came to our shows and bought merch, or simply listened to a track and shared it with a friend, you allowed us to live out the most incredible adventure, and I am eternally grateful for that.

I started Cobra Starship with a fundamental desire to reconnect to music the same way I did when I first picked up a bass at 12 years old; when things were carefree, pure, and less complicated. It was almost 2007 when Cobras set out on its first tour, and just a few short years later, a groundswell of support from diehard kids all over the world catapulted us into unknown territory. To this day I am humbled by how much love our fans showed us, and by the completely unanticipated level of mainstream success we achieved. When my dad reluctantly accepted that I was dropping out of school to pursue music, he never imagined that I would have platinum records, VMA nominations, or even be able to move out of his basement (to be honest, I even had doubts about that last point). But because of you guys, we were able to achieve more than what most kids who start jamming in their parents’ garage ever dream of. I grew up as a little idealist punk who always saw himself as an outsider, and the fact that I got to play in the main arena still blows my mind, so thank you.

To me, the most rewarding thing about Cobra Starship is that we were successful not because we played the game, but because we broke the rules and paved our own way. There was something magical about how everything came together, and we were blessed to have your support and to see our dreams materialize. However, I know that sometimes when things go on for too long, that magic can start to fade … And as hard as it is for all of us, I would rather close this chapter of our lives and be able to look back on it fondly than allow something that means so much to us stagnate. My only hope is that we were able to be the backdrop to some of your fondest memories, and that those experiences have positively impacted you in a permanent way.

Again, I want to thank you; and I want you to know that even though Cobra Starship is coming to an end, the things that we stood for (rooting for underdogs, taking control of your destiny, taking shots at the establishment, not taking any shit, and not taking yourself too seriously), will live on and will continue to matter to me. I hope they will continue to matter to you too.

To Nate, Victoria, Ryland, Alex, Halvo & Andy, I want to thank you guys for believing in my crazy vision and putting your trust in me to steer the ship. No book could ever capture the insanity of our adventures. We built this thing from scratch and we have so much to be proud of. Being in Cobras with you taught me what it takes to be a leader, and for that I will be forever grateful.

I want to thank everyone on our team who worked with us and all of our crew who took care of everything for us. We came up with something totally out of the box and we were able to bring it to life by putting our heads together and creating new strategies. We are lucky to have worked with some of the greatest people in the business and we couldn’t have done it without you.

Looking back on everything, I realize just how grateful I am to have made music for a living. Not simply because I got to (quote-unquote) “live the dream,” but more importantly, because I was able to have such a cathartic lens by which to understand my life; writing was my therapy and shows were my salvation. I also realize how fortunate I am to have experienced a somewhat tumultuous road as an artist. It was because of the challenges along my journey that I was forced to look inwards, accept responsibility and transform. I feel like I’ve lived a hundred lifetimes and that I’ve learned things I could have never been taught elsewhere. I was able to connect with people all over the world and from all walks of life, and I will take these lessons, experiences, and connections with me wherever I go. But now the time has come to move on.

That of course begs the question: Well, where are you going bro?

The truth is that there is nothing that I am more passionate about than music. And although the time has come for me to pass the baton, nothing would be as rewarding for me as the opportunity to share my wisdom and experiences with the next generation of artists.

And so, me and my boy Mike Carden are starting a company to do just that:

And even though it’s over, just remember that Cobras never say die.”