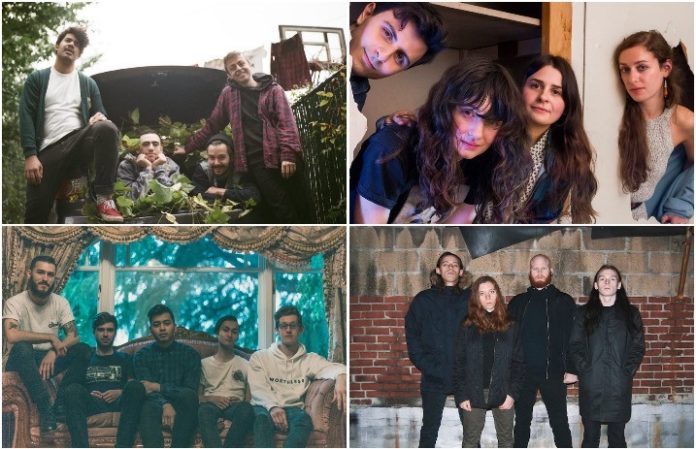 Watch new music videos from Hot Water Music, Diamante and more—plus, don’t miss Tiny Kingdoms and the Grievance Club on tour. Check out the news you might have missed today below!

Code Orange have shared their song “only1(the hard way),” a remix of “Only One Way.” The song was premiered earlier this month as part of Adult Swim’s Singles Series, and it follows the success of the band's 2017 sophomore album Forever, which received a Grammy nomination. The band are hitting the road for a U.K. tour starting in April and U.S. festival dates in May. For a full list of dates and to purchase tickets, you can go here.

Hot Water Music have shared a new music video for “Bury Your Idols.” The song is taken from the band's new full-length album Light It Up, and you can get your copy of the album here. The music video comes just in time for the band to be hitting the road. For a full list of dates, you can go here.

Gulfer have premiered their newest single, “Baseball.” The track is taken from the band's upcoming LP, Dog Bless, which is set to arrive March 2. You can preorder your copy of the album here! The band will also be doing a few shows, and you can grab your tickets here.

Diamante shared a music video for her song “Had Enough.” You can stream or purchase the song here!

Pennsylvania-based death metal group OUTER HEAVEN have officially announced their signing to Relapse Records! Following the news of the signing, the band also announced their plans to hit the studio to record their debut full-length. It's expected to be released later this year. In the meantime, you can listen to the band's latest single, “Into Hellfire,” here!

6. Queen Of Jeans released a new music video for their song “More To Love”

Dating is tough. Finding love on dating apps is hard, and getting your texts unanswered are the absolute worst. Luckily for us, Queen Of Jeans can feel our pain. In their new music video for “More To Love,” the band show the woes of the online dating scene in the most charming way possibile. The band will be releasing their debut album, Dig Yourself, March 30. You can snag your copy of the album here!

Savannah, Georgia’s Vatican and Shenandoah Valley, Virginia’s Heavens Die are bringing their unique blends of metal and hardcore around the U.S. this spring, meeting up with Old Wounds and Vamachara for a handful of shows on the West Coast. Check out the dates above!

After making the announcement that they've signed to Mutant League Records, the Vancouver pop-punk five-piece Chief State have also shared their newest song “Broken Eyes.” Be sure to keep an eye on this band—they are expected to be releasing their debut EP in spring!

9. Tiny Kingdoms and the Grievance Club announced a tour

TOUR ANNOUNCEMENT ��
Don’t miss @TinyKingdomsIL and @grievanceclub ripping some gigs together at the end of March! pic.twitter.com/mPMgrhhy4i

Tiny Kingdom and the Grievance Club will be hitting the road for a spring tour, with more dates to be announced—be sure to get your tickets here! Tiny Kingdom's new EP, Realms, will be out March 14, and you can get your copy here!