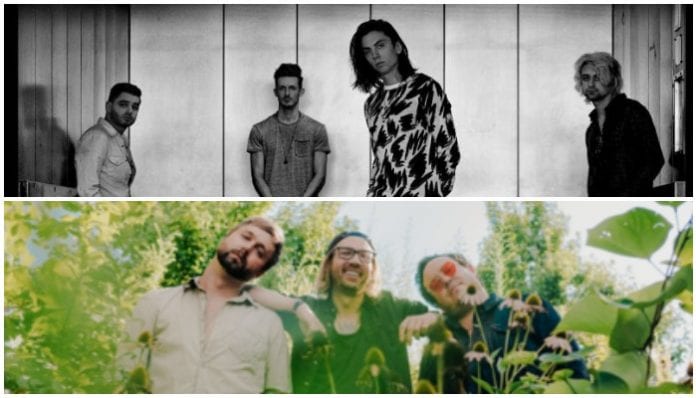 Watch a new lyric video from mewithoutYou—plus, don’t miss an empowering new track from Smoke Signals. Check out the news you might have missed today below!

L.A. indie-pop group Tennis System dropped their new music video “C O M I N G D O W N.” This mysterious new video comes from the band’s P A I N EP. If you like what you see, another music video is on the way. You can stream their EP right now.

Of Mice & Men announced their final U.K. shows of 2018. They will be joined by Bullet For My Valentine for two dates, as well as Loathe and SHVPES. Tickets can be found here.

Philadelphia rock band mewithoutYou released a new official audio track for their brand-new song “Another Head For Hydra.” Their untitled record and EP can be found here for preorder.

New York City rock band Missyou exclusively premiered a black-and-white live session of their song “YourBody” off their EP YourBody which will be released this October. You can watch the original “YourBody” music video right here.

Little Rock, Arkansas’s metalcore band Smoke Signals released a special music video and single today with a mental health message. “Letting Go” explains that suicide is never the answer. The band hope to communicate to listeners that things will get better with time

The Dangerous Summer shared their video for their single “This Is Life” off their self-titled album released in early 2018. Jetty Bones and Save Face will provide support for the band. Tickets can be found here.

Pre-sale tickets go on sale at 11am local time with the correct password for our US dates with @mapsnatlases & @TYScientist!
There will also be a limited number of VIP experiences available. Don’t wait to get yours before they’re gone!
Get more info at: https://t.co/tFXWuRPuXL pic.twitter.com/4JHZClwWMF

New York rock band Coheed And Cambria announced new tour dates for American shows. They will be supported by Maps & Atlases and Thank You Scientist. Tickets can be found here.

If you are interested in being an extra in 'Balance, Not Symmetry', the film we have collaborated with @jamiedadams1 on, please send Name & Location to [email protected]

Scottish rock band Biffy Clyro want your help for a new film project. The trio are seeking extras for a new movie Balance, Not Symmetry. The band wrote a new album specifically for the movie and want fans to shoot with them from Sept. 17 – Oct. 6 in Glasgow, Edinburgh and Ayr. If interested in filming with this band, you can send your name and location to [email protected].

Nonprofit organization To Write Love On Her Arms advocate for suicide prevention. This week is National Suicide Prevention week, and to support the effort, TWLOHA set a fundraising goal of $100,000 through their “Tomorrow Needs You” campaign. Actors Jared Padalecki (Supernatural) and Chris Sullivan (This Is Us), DJ Bassnectar and DJ/producer KYGO among others have aided the cause. With the overwhelming outpour of support, TWLOHA is now raising their fundraising goal to $150,000. You can donate here.