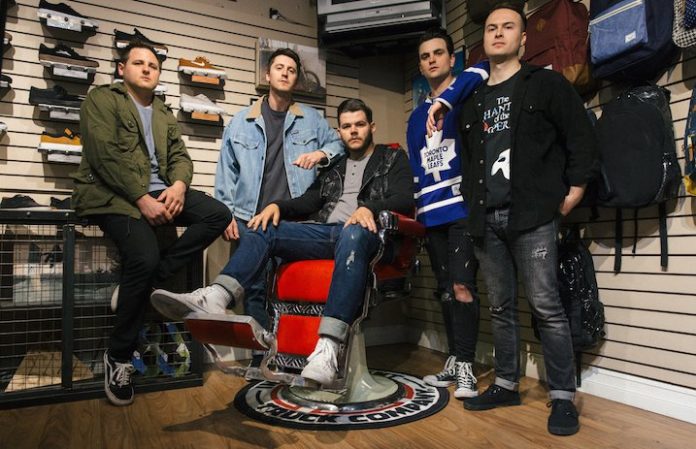 Canadian pop punks Coldfront have announced that they will be taking an “indefinite hiatus.”

“When you can no longer see the opportunity for growth, it’s hard to keep pushing forward,” band members Michael Kelly and Chris Casarin shared on Facebook. “With all this in mind, here we are at a point where we just need a break from it all.”

Kelly and Casarin explain that they both love playing music and still plan to write songs together, but “whether or not they’ll ever be released as Coldfront or anything else is another story.”

I can’t put into words how hard this is to say but Coldfront will be taking what we are calling an indefinite hiatus. It is unlikely that we will be back and if we do return it will be different.

We’ve struggled with lineup changes for nearly a year now. We tried to keep it private so we could release our album and continue touring without interruption.

If you saw us live anytime between September 2017 and February 2018, you saw a new Coldfront that was put together following the departure of our original singer and guitar player. Two weeks ago we lost our second singer and bass player as they too felt the need to step away.

Sure we could find a new singer again, or continue with only one vocalist instead but we need to consider the reasons for everyone’s departures as well.

We’ve been putting everything into this band for almost 5 years now and unfortunately it just hasn’t taken off. We are proud of every piece of music we ever released. We toured as often and as extensively as possible given our situation. But despite our best efforts we were never offered a support tour or a slot on any of the festivals responsible for growing so many bands in our scene. Woe is me, right? But the reality is that those things are necessary to grow your band. This is no ones fault and we don’t amount it to anything but tough luck. Truth is, there are a lot of really great bands out there and only a limited number of these supporting positions available. It takes a certain amount of luck to land some of these opportunities and we just never got lucky.

When you can no longer see the opportunity for growth, it’s hard to keep pushing forward. I know the departures of our former band mates were not personal. They just couldn’t envision the end goal any more given what was available to us.

With all this in mind, here we are at a point where we just need a break from it all. Chris and I (Michael) love this band more than anything and it kills us to let it go. Without it, I don’t know what either of us are going to do. We both love playing music and this is all we’ve ever wanted to do. We still plan to write songs together but whether or not they’ll ever be released as Coldfront or anything else is another story.

Thank you to everyone at Equal Vision Records, Spotlight Touring, and to our number one dude Rich Fernandes for always having our backs. Without you we couldn’t have accomplished half of what we did.

Thank you to Tom, Jared, Erik, Paul and Ian for doing this with us. This wouldn’t have been what it was without all of you.

And lastly, thank you to everyone who ever believed in us. It truly was a blast and an experience that we wouldn’t trade for anything.

We wish the band members the best of luck on all their future endeavors.