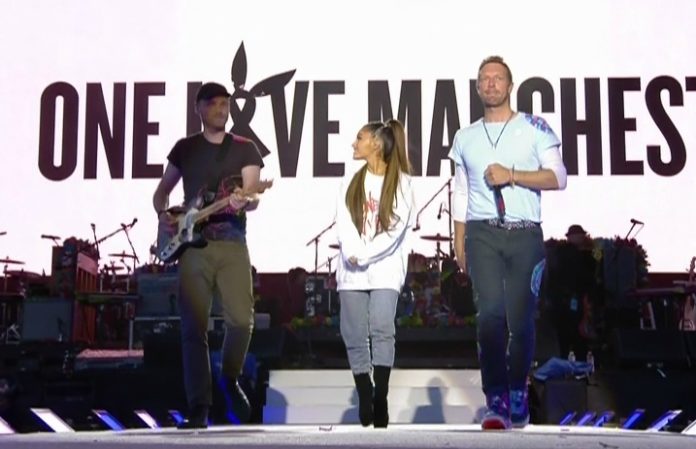 [Photo by: BBC One, supplied by WENN]

Ariana Grande returned to Manchester, England, on Sunday to perform alongside a bevy of other artists at the One Love Manchester concert, a benefit to help victims of the Manchester Arena bombing.

In one special moment from the show, Grande performed Oasis‘ classic “Don’t Look Back In Anger” with Coldplay—watch it below.

Read more: Set It Off, Too Close To Touch talk about playing Manchester 48 hours after terrorist attack

The all-star benefit concert comes just two weeks after the horrific terrorist attack that claimed the lives of 22 people following Grande’s Manchester Arena performance on May 22.

The benefit helped raise a reported “$2.6 million in donations over a three-hour period for a special fund” that specifically assists victims of the attack. This is in addition to the $12.9 million already raised for the cause. (via Variety)

Chris Martin and Ariana Grande – “Don’t Look Back In Anger”

Let us know what you think of the One Love Manchester performances in the comments.