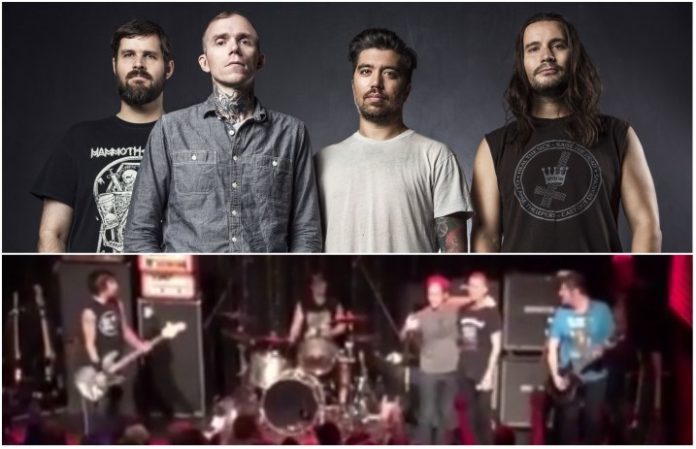 Would you stop Converge mid-set to take a selfie with the band? It sounds more than a little misguided, but that's exactly what one fan did at Converge's gig at Cornerstone in Berkeley, California, on Tuesday night. Watch it below.

Read more: Watch this guy try (and fail) to trash can mosh

As evidenced in the sheer schadenfreude derived from this cringeworthy Instagram clip, the concertgoer's epic selfie fail begins with the fan standing onstage beside the metalcore band's lead singer, Jacob Bannon. Presumably, the excited Converge fan climbed up for a stage dive—but, then, he starts trying to selfie with Bannon, as noted by TandA Media.

The ill-timed action goes over like a bull in a china shop: Bannon looks bemused but possibly pissed, the band literally stop the song they'd just starting playing, and the crowd suitably responds with boos to the imprudent attendee's train wreck of a photo sesh. Of course, the dude takes his belated stage dive, which lands about as well as his selfie! (Oof.)

Talk about a face-plant for the ages. This thing is hard to watch, and yet we can't stop watching. Take a look here: