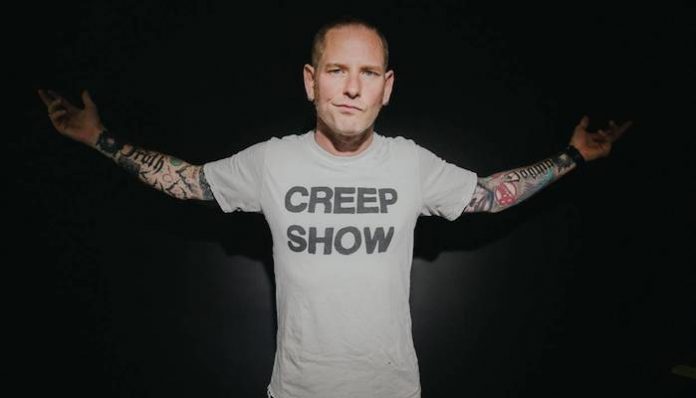 Corey Taylor‘s highly-awaited debut solo album CMFT arrives on Oct. 2. In celebration of the album’s release, Taylor has announced a massive new arena gig that he is livestreaming exclusively for fans.

For Forum Or Against ‘Em, the historic pay-per-view streaming event, Taylor has a lot in store. Not only is he playing new material off of CMFT, but his performance will also include Slipknot and Stone Sour hits.

The massive streaming event kicks off on Oct. 2 and Taylor and his band are taking over the venue The Forum. As well, they will be accompanied by rock n’ roll girl-gang dance squad the Cherry Bombs.

The entire virtual gig will include a full arena production complete with visual pyrotechnics. Along with playing material from CMFT, Taylor plans to perform “select fan-favorite cuts” from Slipknot and Stone Sour. The set will also feature a “handful” of mysterious covers.

“I’ve been saying since the beginning I’d find a way to bring this music and this band to the people,” Taylor says. “And I’m honored that The Forum let us do just that. It’s CMFT in its entirety [and] songs I’ve shared over the years. It’s a celebration, and I’m so stoked to party with all of you.”

Tickets for the massive streaming event are on sale now. Prices start at $15 and CMFT merch bundles are available. Some bundles include a t-shirt, hoodie, poster and access to watch an exclusive acoustic set from Taylor. As well, a limited number of one-on-one video chats with Taylor are also available with some bundles.

Back in August, Taylor revealed that Stone Sour are on an “indefinite hiatus.” This means that the Forum Or Against ‘Em livestream event may be the only time fans can see Stone Sour material performed live for a while.

Slipknot had big tour plans this year before the coronavirus pandemic put a halt to them. Taylor previously shared that once Slipknot’s rescheduled tour dates are complete, he plans to take his solo music on the road.

“I’m definitely hitting the road with the solo band to take this around the world and really show the world that other side of me,” Taylor said.

In July, Taylor released two songs from the forthcoming solo album – “CMFT Must Be Stopped” and “Black Eyes Blue.”

Head here to purchase your tickets for Taylor’s Forum Or Against ‘Em livestream performance.

Are you going to watch Corey Taylor’s livestream performance? Let us know in the comments below.