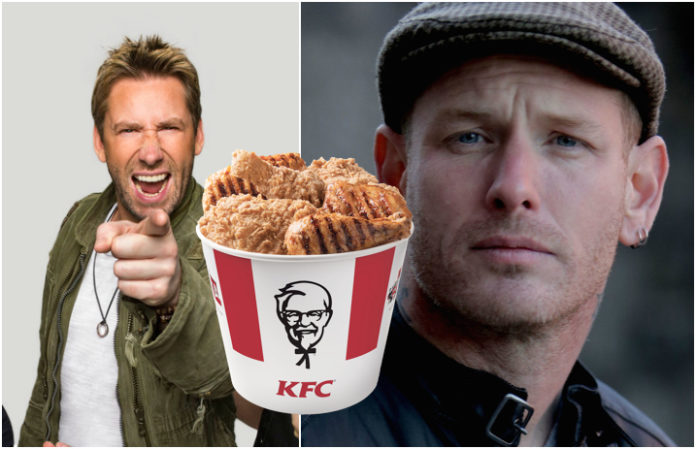 It looks like Corey Taylor and Nickelback's Chad Kroeger are having continued beef… or should we say chicken?

Read more: Corey Taylor says the next Slipknot album will be “violent”

Taylor, the Stone Sour and Slipknot vocalist, had some more words about Kroeger over the weekend at the Pain In The Grass festival in Washington, even comparing Kroeger to KFC fried chicken, according to a report from Loudwire.

As a refresher, Kroeger first went off on Taylor in an interview earlier this month, saying Taylor's band Stone Sour are “not as good as Nickelback” and even calling them, “Nickelback light.” Kroeger also referenced previous put-downs Taylor had seemingly made about Kroeger in past press junkets.

Of course, Taylor fired back, bluntly calling Kroeger an “idiot” and saying of the Nickelback singer, “He's got a face like a foot.”

Now, Taylor responds with even more chicken-fried fire power in an interview with radio station KISW—see the interview footage below. “I'm not talking about that dickhead,” Taylor initially states when confronted with the subject of Kroeger. “Why do I give a shit what Chad Kroeger says?”

After prodding from the interviewer, Taylor drops the Kroeger-as-bucket-of-chicken comparison.

“I'll tell you what. This is how I figured it out,” Taylor says. “Chad Kroeger is to rock what KFC is to chicken. Is that wrong? I feel like I'm not wrong.”

“I'll still eat it, but I’m not going to feel good about it.”