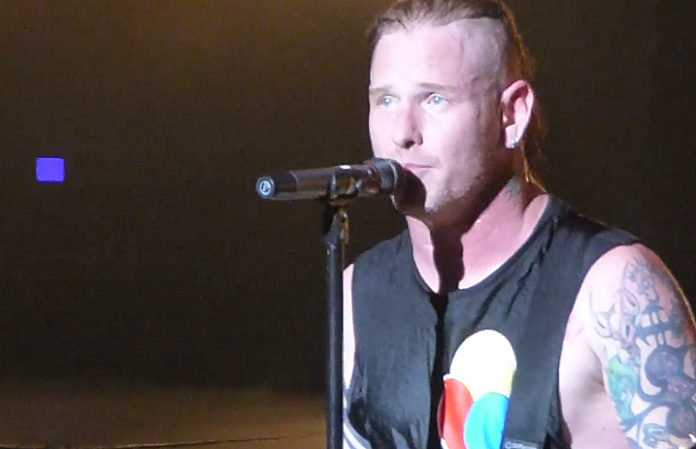 Corey Taylor dedicated Stone Sour's “Through Glass” to Linkin Park's Chester Bennington during the band's show in Mansfield, Massachusetts, last night. Watch some video of the touching tribute below. (via Blabbermouth.net)

Read more: Chester Bennington's cause of death has been confirmed

The music world was shocked by Bennington's unexpected death yesterday, Thursday, July 20. Initially reported as a suicide, it has now been confirmed by the L.A. County Coroner that Bennington died by hanging, according to Billboard. He was 41. Coincidentally, Thursday would have been Chris Cornell's 53rd birthday—the Soundgarden and Audioslave frontman died by suicide earlier this year, and Bennington and Cornell were reportedly close friends.

“We all lost somebody today,” Corey Taylor tells the audience at Stone Sour's Massachusetts gig on Thursday evening, as his voice breaks up with apparent emotion. “I lost a friend… and this was one of his favorite songs. And I wanna dedicate to him. Chester, we will fucking miss you.” Taylor then launches into a powerful performance of “Through Glass,” the second single from Stone Sour's 2006 sophomore album, Come What(ever) May.

Stone Sour released their new full-length Hydrograd in June and are currently touring in support of the album. Linkin Park released their seventh album, One More Light, back in May. On the morning of Bennington's death, the band had just issued a music video for single “Talking To Myself.”