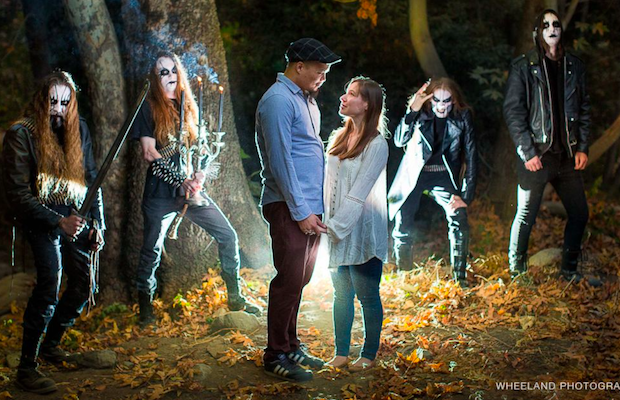 Engagement photos are typically a romantic affair—a couple will look lovingly into each other's eyes on a beautiful beach or in a scenic forest. They also typically don't contain black metal bands.

“We just randomly thought it would be a funny idea if we could get them to be a part of our engagement shoot. So we approached them and asked and they more than happy to accept! Super nice people. I seriously can't make this stuff up,” Awesome told ABC News.

That “funny idea” resulted in the best engagement photos you'll see all year.

Every band knows the importance of getting your name out there, so Coldvoid even gave the couple a free copy of their demo.

“They gave us a copy of their new demo and it was the perfect eerie soundtrack for the drive out of the woods,” said photographer Janet Wheeland. “It was a perfect, spontaneous finale to our photo shoot. We couldn't have planned it better.”

What do you think of the engagement photos? Let us know in the comments!