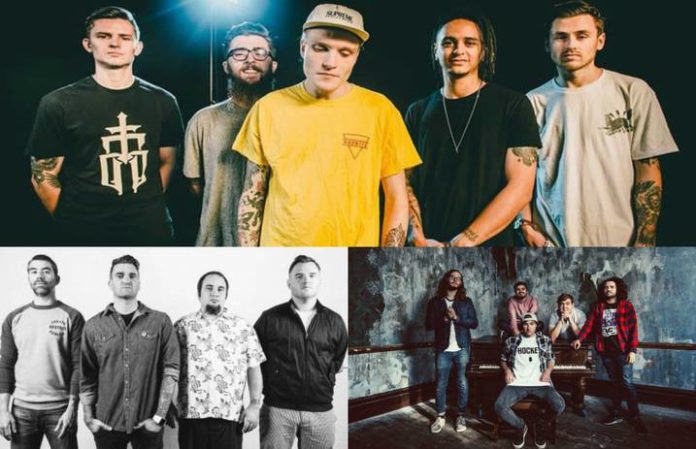 Check out the full guest list and a Q&A with founders Babs Szabo, T.J. Petracca and Morgan Freed below. And act fast! A few more tickets have been released for the previously sold-out event. Grab one here before they're gone!

Read more: Four Things To Expect At The Anniversary of Emo Nite LA/Taking Back Tuesday

Not only that, but keep an eye on Emo Nite's socials (Twitter). A secret Black Friday merch item will be announced soon!

To celebrate this awesome event, remix trio Captain Cuts are also announcing their new mixtape, The Life Of Emo, set to release this Wednesday, Nov. 30.

“Tell all your friends they're through being cool: Emo Nite is the one thing missing from their lives. Sticks and stones may break your bones, but the 1st Tuesday of the month will never hurt you. The morning of the 1st Wednesday is the place we have come to fear the most, but Emo Nite is a fever we can't sweat out,” says Captain Cuts' Ryan McMahon. “TJ, Morgan, and Babs single handedly revived an entire generation of real boys and girls who grew up listening to pop-punk and emo music. We are trying our best to give back to the genre that inspired us to be all killer and absolutely zero filler. We leave everything out there – as a result, this beautiful night in Echo Park might be slowly killing us. But if this is what it feels like in love and death, we welcome it with open arms.”

How does it feel to be celebrating your two year anniversary?
Babs: It feels really amazing to be celebrating our two year anniversary. It's surreal to be honest.
TJ: It’s honestly pretty surreal. This whole thing has gotten way bigger than we ever imagined or inteded it to get. I’m so honored and happy to be celebrating two years of this party. We have made some amazing new friends, got to travel and see a ton of new cities, and meet our idols/heros. Stepping back and looking at it from afar… I truly can’t believe it.
Morgan: Feels like the one year party was last week tbh lol

Did you ever think you would get here?
Babs: I can't believe it's already been two years of Emo Nite. I keep reflecting on the unbelievable experiences and wonderful people I've met.
Morgan: I don’t think we ever envisioned of what “here” would look like. We just pretty much set out with the idea to throw a fun party for our friends. So, no, not really. Never thought it would look like this but I’m really really happy it does.

You manage to create an experience within every event. How do you come up with such creative ideas?
Babs: We never stop planning Emo Nite. It's not like we get to the office and have brain storming sessions and then act on those ideas. Of course, we do that too. But most of the time we'll text each other at one in the morning about an idea that suddenly came to one of us. We get inspired by the world around us, and since we each have pretty different interest, we're able to bring in ideas from all aspects of life: art, film, music, books, memes, etc. We also own a creative agency called Ride or Cry, so we're constantly thinking of creative ideas, that helps too.
TJ: We really just try to keep throwing the party that we personally would want to attend. We try to just have the most fun with everything that we do for Emo Nite.
Morgan: I’m personally inspired by stuff we see everyday so we just apply that to Emo Nite. Like I went to dinner and saw a mariachi band and then was like “let’s do that”

How did you go about choosing the artists for the 2 year party?
Babs: I met Tyson in Vegas when I went out there to see them and Blink-182 a few months back. I invited him to come out and guest DJ (my actual words were “you should swing swing by Emo Nite”, I'm very embarrassing), but after some planning and figuring out logistics, they were able to do an acoustic set! For me personally, that's going to be really special. I've been a huge fan of All-American Rejects since high school. I also religiously watched Parenthood, which if anyone hasn't seen it, please go do that now. We're lucky to have some guest DJs we've had in the past return, like Jordan from New Found Glory and Tyler Posey who is really immersed in the emo/pop-punk culture. We also have some rad bands playing at The Echo upstairs. Movements is playing, and last time I saw them I stood there in tears, in complete awe. I was so taken aback by the power of their live performance. I'm a huge fan. I also can't wait to feel the girl power in the room when Luna Shadows and Tillie hit the stage. Cartel DJ'ed our Emo Nite in Nashville earlier this year, so we thought it would be cool to fly them here and give the LA crowd a chance to see them as well. Captain Cuts will be back! Ham on Everything are back! Oh, and I haven't even mentioned Aaron Gillespie. The Almost was one of my favorite bands in high school. My sister and I listened to Southern Weather on repeat for years. And I can't even talk about Underoath. Hearing Underoath acoustic songs will be magical. Team Up are our friends from the UK who also throw an emo night there. We met them at Warped Tour in Vegas and they have become our family. They're flying here to DJ and I'm really looking forward to seeing them. I'm really geeking out now so I'll stop haha.
TJ: The artists for the two year include many people who have already been a part of the emo nite family over this past couple year and some who are completely new. All of them are artists we are fans of, first and foremost. We try to pick bands that we love from the small local bands to the big headliners—it’s all stuff we are excited about and are stoked to see as fans.
Morgan: Well Young Thug wasn't available so… We just do the same thing we have been doing for the last two years. Go to any lengths to find artists and bands we think rule and look up to and find a way to get to them whether it’s through a distant family member or sliding up in their DM’s

What is it about the two year event that is going to be different than all other Emo Nite’s prior? Any surprises planned?
Babs: Everyone who comes to Emo Nite know that they will see some unexpected things at the two year. We always have something weird up our sleeves.
TJ: We have so many surprises planned….
Morgan: “When I was a young boy, my father took me into the city to see a marching band”

What is next for Emo Nite?
Babs: We have a lot of things planned for next year! So many things. All of the things.
TJ: 2017 should be a really interesting year for Emo Nite. we’re continuing to grow our merch line and expand our parties to new markets. we have tons of new things in the works and we’re very excited to see what emo nite becomes next!
Morgan: How much time you got?