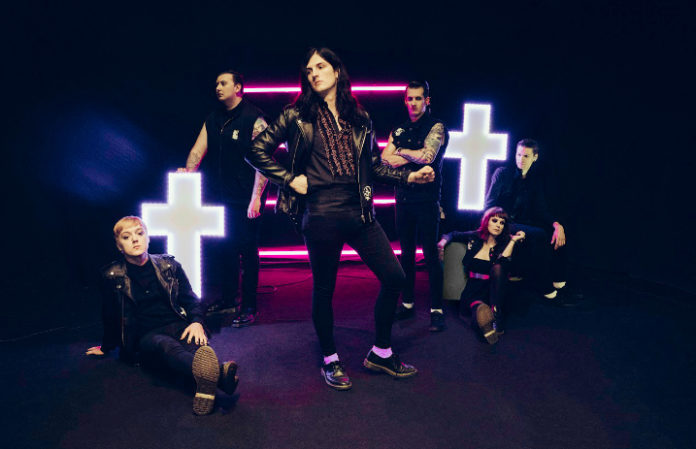 Creeper's Hannah Greenwood has issued a statement in response to the harassment that took place at the UK rock band's show last night in Manchester.

The keyboardist/vocalist spoke out about the event, tweeting: “Unfortunately my night was slightly tainted when I came off stage to find out some guy yelled a derogatory comment at me before 'Darling.' This type of behaviour is not tolerated at Creeper shows – it shouldn't happen at any show. Our shows are safe places where nobody should be made to feel uncomfortable, on or off stage. I'm just disappointed I didn't hear the comment at the time or I would have called it out there and then.”

You can read the full statement from Greenwood's tweet below:

The Creeper Cult have been very supportive of Greenwood's response to the incident:

This is fantastic. So lovely to know the cult have my back. �� https://t.co/UmnLy3vOBf

Just a few months ago, Greenwood even issued a statement to Alt Press on sexism and sexual assault, saying:

“It's so disheartening to hear that incidents of sexism and sexual assault are still occurring. I've faced a number myself since joining Creeper, one of which we called out last year and were still hit back with sexist comments for doing so. We have to work together and always call it out in order for some people to realize what they're doing is wrong.”

Plus, Greenwood faced backlash for calling out industry sexism, following her experience with a male security guard.

During load-out, Greenwood, clearly displaying her pass, was denied readmittance to the venue by a male security staff member who had allowed her tourmate letlive. bassist RJ Johnson in several times sans pass.

“This isn't unusual for me to be stopped or singled out being a woman, it's not the first time this has happened to me on tour with Creeper, so I decide in the moment that enough is enough and call this guy out,” she wrote. You can read her full statement on the post below.