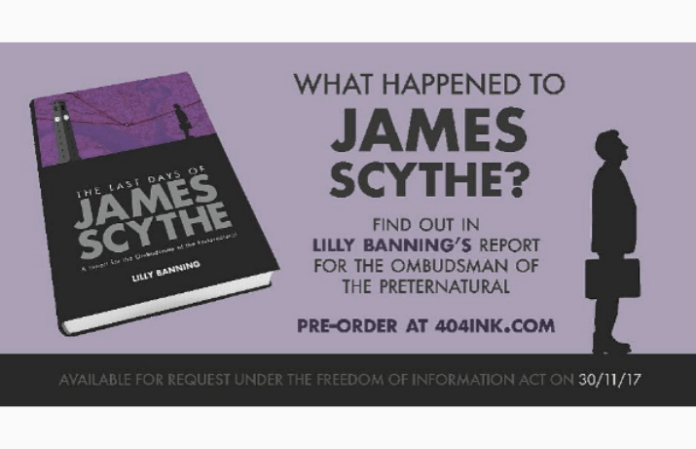 If you have not been immersed in Creeper’s spooky online mischief, you may be unfamiliar with exactly who missing paranormal investigator James Scythe is or why you should care about him, but the band have now announced that they will be releasing a book and detailing the fictional character’s companion narrative to their album Eternity, In Your Arms, so here’s the gist.

“What you are about to read is confidential. One of the Ombudsman of the Preternatural's former Special Agents went missing in 2015 and it's time to answer the question that the authorities have ignored: what happened to James Scythe? Many have tried to follow the unnatural and unsettling story of Southampton's prolific mystery but no one has been granted full access to the official James Scythe case files to piece together exactly what happened to him in his last days.

Lilly [Banning, writer] will be back with her findings shortly. We trust you will keep this between us.”

We’re guessing what ultimately happened to him can’t be good, based on this teaser Creeper posted Monday:

The cliffs notes of the story (because when we go too deep, the conspiracy theories come out and things get genuinely weird) is that in Southampton, U.K. (Creeper’s hometown), there are two unexplained paranormal happenings. First: That of the Callous Heart, an eternally young gang that stalks the city’s streets. You’ll recognize these ghost kids by their dark clothing and Callous Heart (or “Creeper logo,” for the less imaginative) back patches. The other is of the Stranger, a large cloaked figure who has been seen throughout the city and has been known to haunt dreams and to appear to those experiencing sleep paralysis.

Learn more about them in Scythe’s podcast “The Spectral Skeptic,” below:

Now, atop the spooky bits, Scythe has a personal interest in Southampton as it was site of his wife Mary’s death in  2006. That’s where things get interesting. We’ll just drop Creeper’s Eternity, In Your Arms video trilogy below for you to figure it out.

Really, people, this is just the very tip of the iceberg. Conspiracy theories welcome in the comments!