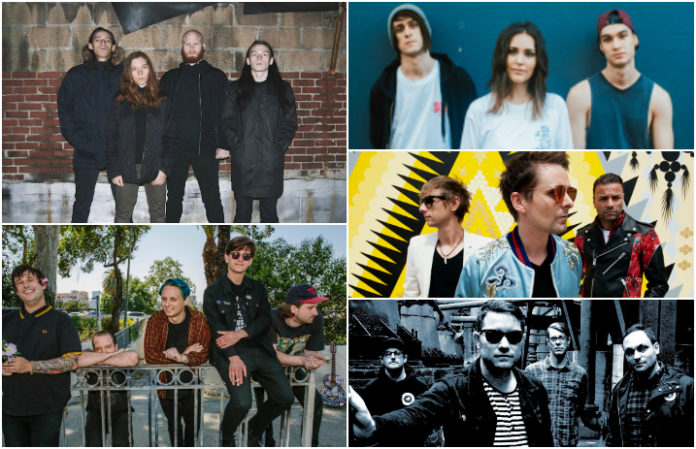 Hear new music from Culture Abuse, Stand Atlantic and Nothing More—plus, don’t miss Code Orange, Quicksand and more on tour. Check out the news you might have missed today below!

Read more: Papa Roach drop new version of “Periscope” video and other news you might have missed today

1. Culture Abuse announced their signing to Epitaph Records, and shared their new track “So Busted.” Give it a listen below!

“So Busted” is a rock and roll love song about “all the stuff you are told you need in life but when it all boils down all you really want is to feel loved and cared for” frontman David Kelling explains.

2. MUSE announced a special concert to benefit The Coalition for the Homeless.

NYC! Pleased to announce a special concert on July 24 at @SummerStage in Central Park to benefit @NYHomeless

3. Nothing More premiered the music video for their new single, “Go To War.” Give it a watch below!

“Go To War” is the lead single off the band’s forthcoming album The Stories We Tell Ourselves, set for release September 15 via Better Noise Records. It’s available for preorder now.

4. Rock duo ‘68 announced a handful of headlining shows with support from Whores. Check out the list of cities and dates below!

‘68 will kick off the short run solo on August 1st at Backbooth in Orlando, FL and share the stage with Whores. for the remainder of the dates, wrapping up on August 6th at Masquerade in Atlanta, GA.

5. Stand Atlantic debuted their new music video for “Coffee At Midnight.” Give it a watch below!

The track is taken off their forthcoming EP, Sidewinder, which you can preorder here.

6. Code Orange, Eternal Sleep, Jesus Piece and Trail Of Lies have announced tour dates for September. Check out the cities and dates below!

Read more: Corey Taylor says the next Slipknot album will be “violent”

They’ll be joining the likes of 3OH!3, Cartel, Good Charlotte, Mayday Parade, Simple Plan and more! You can book your cabin now!

8. Wovenwar debuted their new music video for “Cascade.” Give it a watch below!

The song is taken from the band’s 2016 record, Honor Is Dead.

9. Quicksand have announced U.S. tour dates for this fall. Check out the full list of cities and dates below!

Metal Blade Records and BMG are proud to announce the upcoming release of For the Sake of Heaviness: the History of Metal Blade Records on August 29th. written by label founder and CEO Brian Slagel with Mark Eglinton, the book features a foreword by Metallica's Lars Ulrich and celebrates the storied label's 35th anniversary.

The book, written by label founder and CEO Brian Slagel with Mark Eglinton, features a foreword by Metallica’s Lars Ulrich and celebrates the label’s 35th anniversary.

“I have been asked many times about doing a book about the history of Metal Blade and it just seemed like a cool thing to do to document the 35th anniversary. You never really stop to think about a lot of this stuff, so doing the book is a great way of looking back at how many awesome things have happened to me and Metal Blade,” Slagel says. Preorder options will be coming soon!