The wait is over: Dance Gavin Dance have finished recording their 10th studio album and are hitting the road early next year.

The post-hardcore favorites have announced the Spring 2020 tour, set to take off in March across 31 cities in North America before closing out the tour at the band’s own second annual Swanfest.

Animals As Leaders, Veil Of Maya, and Royal Coda will be joining Dance Gavin Dance on this massive tour, with one more act to be announced at a later date.

Most recently, the five-piece released a music video in October for their new single “Blood Wolf.” Frontman Tilian Pearson took to Twitter to explain that the track would not be on their new record. It will instead be released as a duo with their song “Head Hunter”.

In case you were wondering, Blood Wolf is not on the new album, it’s the second half of the Head Hunter/Blood Wolf duo (the artwork for both singles form one piece). We are recording the new album now, to be released in 2020.

Besides their new video, they also announced last month that their second annual Swanfest will take place April 25 at Papa Murphy’s Park in Sacramento, California: now known as the final stop on the Spring 2020 tour.

Animals As Leaders, Veil Of Maya, and Royal Coda will also be playing SwanFest, along with Knocked Loose, Movements, Hail The Sun and more to be announced.

Tickets for the Spring tour will go on sale Friday Nov. 15 at 10 a.m. local time, while VIP packages are available now for pre-order.

For tickets and VIP packages information head here. Check out the full list of tour dates and locations below. 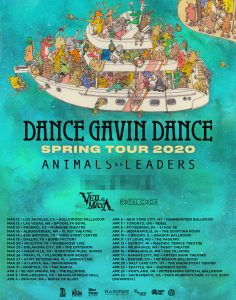