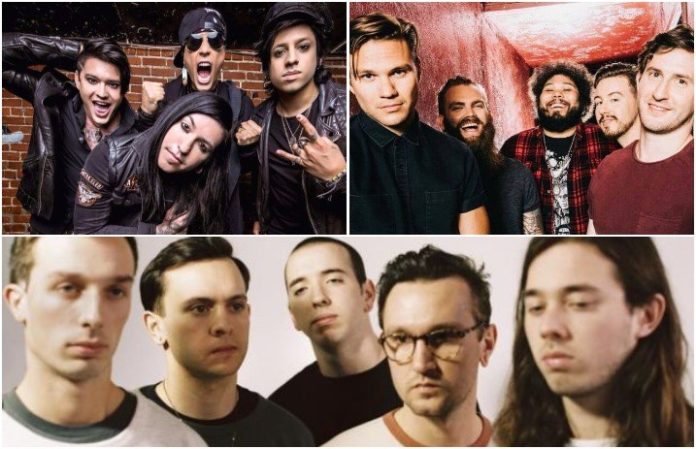 Watch new music videos from TLE and Reno Divorce—plus, don’t miss Citizen’s Studio 4 performance. Check out the news you might have missed today below!

Dance Gavin Dance announced their new album, Artificial Selection. The album is currently being sold for pre-sale, and you can snag merch bundles here. You can also catch Dance Gavin Dance when they hit the road with Underoath and Veil of Maya in April. For tickets and a list of dates, you can go here.

It just wouldn’t be Slam Dunk Festival if we didn’t round up a few of our pals to come and play some laid-back, acoustic jams for you to chill out to, and this year is no different! Find out more at https://t.co/JhXLT1TDZi #SDF18 pic.twitter.com/TNgJpIV09d

Slam Dunk is rounding out their lineup and announced this year’s acoustic performers. Some of the bands you’ll find on the acoustic stage are Four Year Strong and Speak Low. The festival is taking place May 26-28. For more information and to get your tickets, you can go here!

Settle Your Scores are back, and to celebrate their return, the band shared their new single “Zero Hour.” The song is taken from the band’s upcoming album Better Luck Tomorrow, and you can snag your copy of the album here. The band will also be going on tour with Sink The Ship and telltale. For a full list of dates and to purchase tickets, you can go here.

Stoked to announce we’ll be heading out this May as direct support to @EscapeTheFate on their “This War Is Ours” Ten Year Anniversary Tour.

Escape The Fate announced Awaken I Am and Between Kings as their tour support for their This War Is Ours 10-year anniversary tour. Tickets are available this Friday here. Check out the dates below!

Citizen did a live performance at Studio 4, and you can stream the songs here. The band are currently doing a string of West Coast dates with Basement, Pronoun and Souvenirs. For a list of dates, to purchase tickets and to see who else Citizen will be touring with over the next couple of months, you can go here.

6. Vain Interior shared a lyric video for their new song

Vain Interior shared a lyric video for their song “Strongstyle.”

Denver pop-punks in Reno Divorce shared a classic-style music video for their song “She’s in Love With the Avenue.” The track is taken from the band’s most recent EP Ship of Fools.

Our new album MEMORY LAME is now available for preorder!!! It's out next month on Topshelf Records! Listen to the song HUG OF DEATH right now!!!

Giraffes? Giraffes! announced their new album Memory Lame, out via Topshelf Records April 27. You can pre-order the new album here. The band also shared a song from the album called “Hug of Death.”

Hopeless Records dropped a massive compilation, Hopeless Records and Adam Fox The Great Big Susiepalooza Comp that features 100 artists, including Sum 41, Silverstein, Bayside and more. The best part? It’s a charity compilation for pancreatic cancer research. You can snag your copy of the compilation here.

Cleveland’s own Archie And The Bunkers shared their new single “Laura.” The track is taken from the band’s sophomore LP Songs From The Lodge, out April 20 via Dirty Water Records. You can get your copy of the album here.

11. TLE channel their inner dad in their new music video

If you have ever wondered what the chaotic world of being a dad is like, don’t worry—TLE have you covered. The band’s newest music video for “A Pretty Nice Little Dadurday” highlights the day-to-day life of a dad.