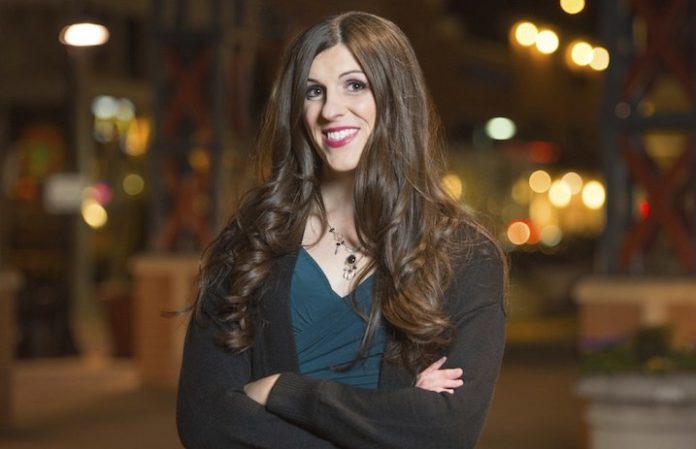 Danica Roem is looking to make some history in our nation's politics.

The transgender journalist, stepmom and metal vocalist is currently running for the Virginia House Of Delegates, and if elected, she would be the first openly transgender state legislator to be seated in the United States.

As reported by NBC News, Roem's race for the delegacy in Virginia's district 13 is putting a national spotlight on the local election. Former Vice President Joe Biden even endorsed Roem's candidacy in a statement, giving a boost to the Democrat who's a lifelong Virginian and longtime metalhead. (Roem previously performed in the Manassas-based metal band Cab Ride Home.)

“I'm proud today to endorse Danica Roem's historic candidacy,” Biden said, “because I know her emphasis on improving transportation infrastructure is critical to improving the quality of life for thousands of Virginians.”

The “transportation infrastructure” issue referenced by Biden is just one vital component of Roem's campaign platform. She told Potomac Local, “The top issue we face in the 13th district is fixing Route 28 so morning rush hour isn’t unbearable. It was awful in 1992 and it's awful today. It's time to change it.”

However, Roem's state delegate hopes come up against the 11-term incumbent Bob Marshall, who's well known for his stance against LGBTQ rights. As noted by Metal Sucks, Marshall obtusely asked the Prince William Times, “Why do you call Danica a female? Did Danica’s DNA change?” A more boneheaded quote from the Republican politician couldn't be imagined.

As for Roem, she wants to unite rather than senselessly divide. “We're trying to make a statement about making Virginia a more inclusive commonwealth,” she recently told Noisey. “We're trying to get rid of laws that the Supreme Court said, 'Guess what? They're not valid anymore.' Marriage equality is the law of the land, whether anyone likes it or not … and it's time for us to take out those parts of our state code that still make us a regressive place.”

“We should be more inclusive,” Roem said, “and it shouldn't matter what you look like, where you come from, how you worship, or who you love—we should be saying, 'Welcome to Virginia.'”

So get out and vote on Nov. 7, especially if you're in Virginia.