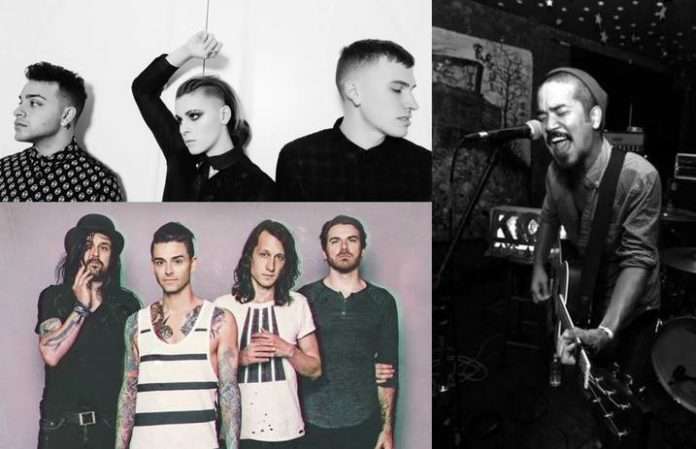 Mid-week stress starting to set in? Finals getting you down? Well, take a breath and rejoice: Dashboard Confessional are going on tour, and PVRIS have launched a jaw-dropping CVLT pop-up shop. Cheer yourself up with some of the news you might have missed today.

Read more: I See Stars release new music video for “Calm Snow” and other news you might have missed yesterday

1. Just in time for the holidays, PVRIS have brought back their CVLT pop-up shop, complete with limited quantity items.

Yes—they have a hockey jersey:

And yes—they have the perfect beanie to keeps your head warm this winter:

What are you picking up?

2. Pandora is entering the music streaming war to compete with the likes of Spotify and Apple Music.

Pandora Premium will launch next year, and, at 10 dollars a month, customers can access extremely personalized on-demand music streaming, including the ability to add songs to playlists with the touch of a button; search, browse and new release sections tailored to listening habits; and an app that changes color to match the album art you're playing.

[Photos via The Verge.]

What are your thoughts on Pandora Premium?

3. Equal Vision Records have announced their newest roster addition: Nevada-based progressive rock trio Stolas, who will be releasing a new album in spring 2017.

That yet-to-be-titled record will be the band's third—a follow-up to 2014's Allomaternal and 2013's Living Creatures.

“I have always wanted to work with Equal Vision in some capacity. Since high school, it’s been a goal of mine. Based on our style of music, and Equal Vision’s alumni being so musically versatile, I just feel it’s a good home for us,” Guitarist Sergio Medina says about the signing.

Bassist RJ Reynolds adds, “Equal Vision furnished my generation with so many terrific bands, like Coheed and Cambria, who—on top of being progenitors of our genre—also write impactful music. With Stolas, I feel that same potential to connect with people in a lasting way, and Equal Vision exclusively deals in that kind of band.”

Stolas are heading out on tour with the Number Twelve Looks Like You. Check out those dates and a teaser for the new album below.

4. Koji is releasing his first recordings on Run For Cover Records from 2010. Spring Song, Vol. 1—a collection 10 live songs recorded in living rooms, basements and punk houses across the East Coast—documents Koji's early years, touring alone in his parents mini-van with nothing but an acoustic guitar.

This is the first time ever the record has been pressed on vinyl, limited to an exclusive 300 copies over two variants: translucent green and black (100 copies) and a solid translucent green (200 copies). Recipients will get an instant download of Spring Song, Vol. 1 immediately after purchase while the vinyl will be shipped in January 2017.

5. Dashboard Confessional are going “old school” and taking it “back to the clubs where it started” with a U.S. tour in early 2017.

Going old school! Back to the clubs where it started! Got a bunch of new material and we’ll still play all the favorites. Presale tomorrow! pic.twitter.com/bs6t4RKrMt

Watch more: Waterparks perform “Stupid For You” on APTV sessions