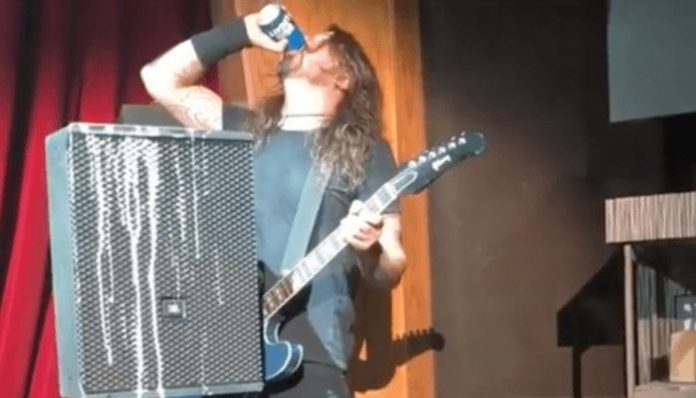 Dave Grohl fell off of the stage at the Foo Fighters’ Las Vegas show last Wednesday evening after pounding a brewskie. After spilling half of his Bud Light (of all beers) over the speaker system, the frontman took an embarrassing dive mid-guitar solo.

However, it wasn’t long before security helped Grohl back up on stage. Following the boost, he got right back to playing as if it never even happened.

The disaster all started when Grohl motioned for a fan to hand over his beer. The frontman then set the Bud Light on top of the monitor and tried to sip it without using his hands before the beer ultimately tipped over.

Ironically enough, according to Spin, the show was sponsored by JBL speakers.

Then, after failing miserably the first time, Grohl picked up the can and chugged the rest of the bad boy in five seconds flat.

It would have been a great recovery if not for what happened next.

You know what, just check out the video for yourselves below.

The Las Vegas show took place at The Joint at Hard Rock Hotel.

On the flip side, Dave Grohl has been in the news recently for his wholesome stage guests. Last month, Grohl rocked out with the Foo Fighters’ dummer’s son. Additionally, Grohl invited a seven-year-old child to shred on-stage before giving him his guitar.

What do you think about Dave Grohl’s funny mishap? Sound off in the comments below.