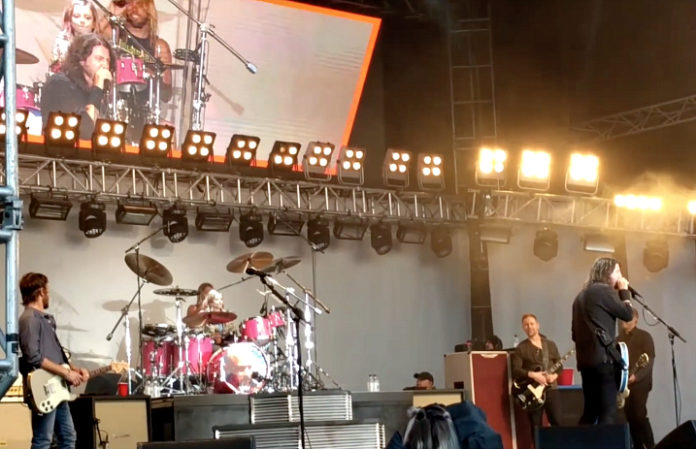 During their recent set at Secret Solstice Festival in Reykjavic, Iceland, the Foo Fighters brought out a special guest drummer: Dave Grohl’s eight year old daughter, Harper. Harper played a cover of Queen’s “We Will Rock You,” which according to Ghrol was the first song she’d learned. The whole band joined in on her drum debut, with Taylor Hawkins, Foo Fighter’s drummer, taking vocals.

In the video, Grohl jokes that Harper had recently asked him to teach her to play drums. He says he asked, “‘Do you want want me to teach you?’ She said, ‘Yes.’ And then I said, ‘Do you want to get up in front of 20,000 people in Iceland and play?’ And she said, ‘Yes.’”

It looks like Harper won’t be taking Hawkins’s spot permanently, but we think she’ll take after her father and be an amazing drummer someday!

Watch the fan video below.

Earlier this month, the Foo Fighters made their epic return with a new single “Run,” alongside an amazing music video directed by frontman Dave Grohl.

Plus, back in February, the band surprised fans attending a secret show in England—also their first show in over a year—revealing that they'll be headlining Glastonbury Festival this summer, while also debuting two new songs “Keep Your Pretty Promise to Yourself” and “Run With Me.”

Do you think Harper Grohl will be the next great drummer? Let us know in the comments below!