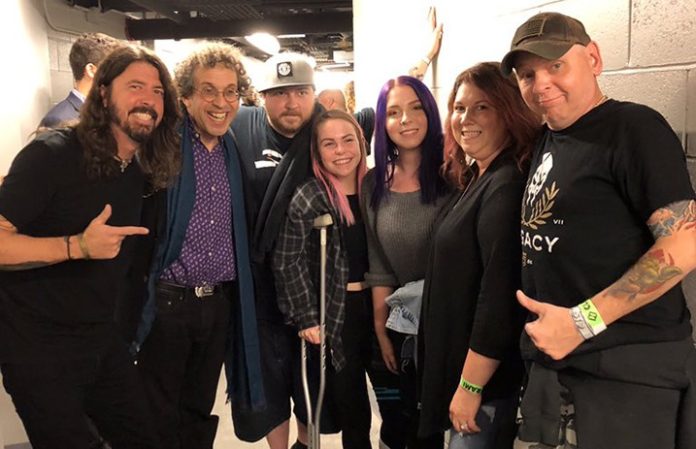 We already know Foo Fighters' Dave Grohl has one of the kindest hearts in the rock world, and he's proving once again that he's one of the loveliest rockstars around.

One fan went to see the band in Washington D.C., and when she was told by Grohl's orthopedic doctor that she'd need a shoe on her foot to fully recover from her injury, Grohl did the kindest thing: Gave her his own shoe.

“Dave brought him [the doctor] out once he saw that I was on crutches, and that's when his doctor mentioned that I was supposed to wear a shoe with my brace,” Sabryn tells AP. “I told him that my shoes didn't fit over it because it's pretty big and my shoes are kinda small. So Dave said, 'You need one of my big high tops!' and I laughed it off.”

Grohl couldn't leave the situation be, so he ran into his dressing room and grabbed her the extra shoe that he had from when he broke his leg, and our hearts are truly so full.

And, in case you were wondering, Sabryn and her friend Kaydee, whose uncle was doing sound for the show that night, decided to keep the shoe. But really, wouldn't we all treasure such a keepsake?

“I wore it for the rest of the night after Dave told me to put it on,” Sabryn tells us. “It's definitely one of the coolest things to ever happen, and probably the funniest.

“If you wanted to know what we did with the shoe, it's sitting on Kaydee's shelf in her room because we thought it would be a nice display piece.”

And Mr. Dave Grohl, if you're reading this, Sabryn has one final message for you: “THANKS FOR THE SHOE!!”

Amazing. Check out the adorable photos below!

tonight dave grohls orthopedic doctor told me if i didn't put a shoe on my foot it wouldn't get better. so dave gave me one of his shoes? pic.twitter.com/updeujumtx

Foo Fighters are currently touring North America in support of their newest record, Concrete And Gold. Check out the remaining list of cities and dates below!