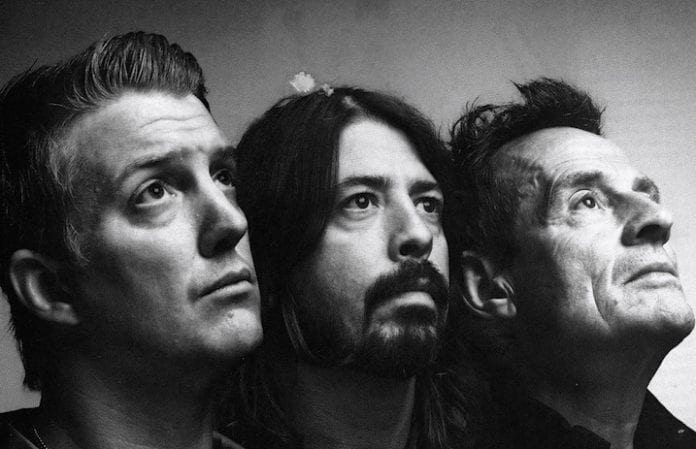 Foo Fighters frontman Dave Grohl is talking about the possible reunion of his rock supergroup, Them Crooked Vultures.

In 2009, Them Crooked Vultures—Grohl's band with Queens Of The Stone Age's Josh Homme and Led Zeppelin bassist, John Paul Jones—released their (so far) sole album, a self-titled affair that spawned the singles “New Fang” and “Mind Eraser, No Chaser.” Since 2010, the Vultures have been essentially dormant, with a few whispers of a possible second album to come—although no further material has yet been released.

In an new interview with Beats 1 Radio, Grohl explains that he is often reminded of his time in Them Crooked Vultures, and frequently texts his fellow Vultures to reminisce on their time playing music together. (via Metal Injection)

“Every once in a while, you’ll be up at night drinking a bottle of wine by yourself, and you’ll watch some Crooked Vultures live thing on YouTube and go, 'We were so good!,' and then we’ll text each other saying, ‘Miss you man!' and then I don't hear from anybody for five months.”

“We do talk about it,” Grohl states, in reference to Them Crooked Vultures performing music together again.

Does this mean we'll soon see a Vultures reunion? Perhaps the members will need to text a bit more often for that to happen.

Would you be interested in another album or future live shows from Them Crooked Vultures? Let us know in the comments.