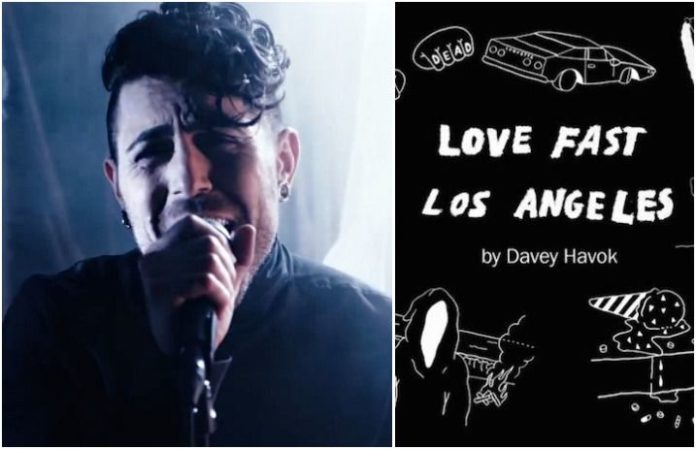 Davey Havok's new book Love Fast Los Angeles is out Feb. 6, and Havok has announced a special signing, along with a reading and Q&A.

The signing is set to take place Feb. 13 at 7 p.m. in Hollywood, CA, and the reading/Q&A will be exclusive to the first 50 to RSVP via Pledge Music Access Pass.

Here's the all-too-real synopsis from Havok's new novel: “Love Fast Los Angeles tells the story of Alvin, a party photographer. His controversial, taste-making site has brought fortune and fame to hundreds, including the wild girls of the hit reality series All F's. With a fiery, freshly broken heart, Al attempts to enact his vendetta against a former online teen heartthrob while struggling to gain the affection of disaffected socialite, Sky Monroe.”

“Love Fast Los Angeles was written and edited all over the world,” says Havok, “but the majority of it was tapped out in a West Hollywood coffee shop. The owners and managers were kind enough to let me squat while sapping their wireless. I began writing it immediately after Pop Kids was finished. I was easily inspired to keep that world alive out of love for the writing process, for the pop kids themselves, and by the impact of the very real culture they represent.”

You can watch an intense trailer for the book below:

Watch more: A chat with Davey Havok and Jade Puget at the first XTRMST show