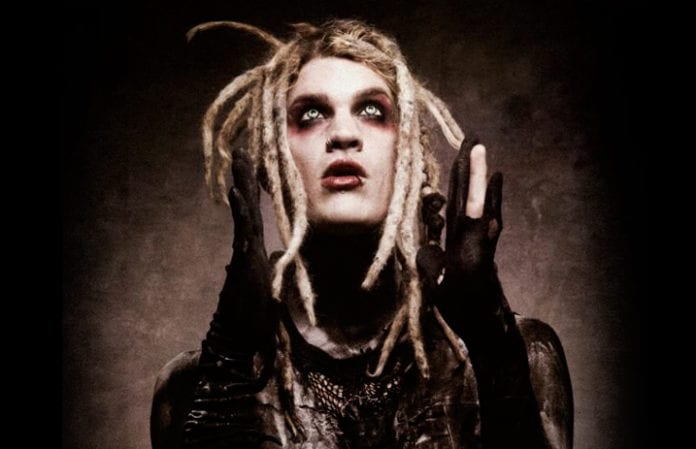 Indeed, Suicide’s story is both inspiring and enlightening. He discusses being a child of divorce, and how he used to spend offtime in school hiding in the art and music rooms (“I was scared to go to lunch because I didn’t have a clique of friends”).

A bona fide polymath, Suicide’s outlets outside of his electro-metal band include designing clothes (“I never really felt like I found stuff at Hot Topic that I liked, so I would just mod stuff out. I taught myself how to sew. It wasn’t because I wanted to learn how to do it; it was because I wanted something cool for myself.”) as well as sidelines in both painting (“I don’t ever grit it [like] how you would at art school to do it.”) and tattooing.

And when Shea asks about Russian involvement, he’s not talking about American politics, but rather the way that country’s fans made his band feel incredibly welcome during their first visit this past February. “Maybe it’s because of the commodity of us—that they don’t see us multiple times of the year—but it was a big deal to them,” says Suicide about the shows. “In Moscow, they sang all the songs. We were offstage for 10 minutes, and they demanded an encore. We literally had to go through our catalog and think, ‘What can we go out and play these guys?’ They were screaming, but they weren’t leaving. I was sick, so I was like, ‘Dude, I’m done. My throat is done; I’m not singing anymore.’ And it got to the point where it was like, ‘We have to go out.’” Suicide says the Russian tour was quite emotional as it was guitarist Niko Gemini’s first trip back to his homeland in seven years.

Later on in the chat (in a section that seems more in line with AP’s Cautionary Tales podcast), Suicide tells the tale of extracting himself from StandBy Records, the former label he had been battling with for years, before producing a revealing video about the label’s practices and transgressions toward the band. “I realized that paying a lawyer wasn’t going to get me out of this. Going to hearing after hearing wasn’t going to get me out of this. When I made that video, I pretty much threw caution to the wind and threw my middle fingers up. [I told my lawyer,] ‘I don’t care if you think this is going to screw up my case. I don’t care if I’ll ever get work in the music industry again. I don’t care if you drop me as a client. I have to put this out because I need to explain to people why we’ve been stunted for so long.’”

And finally, Suicide shared some wisdom regarding the mistakes people make with their first tattoos, as well as the personalities of the artists who render them. “A lot of [tattoo artists] have shitty attitudes,” Suicide continues with candor. “They’re all very competitive. Because it was never my number-one thing, if someone’s better, props to you. I’ve never had the desire to be the best artist in the world when I was tattooing. I think for these guys, that is their bread and butter, that is their number-one [priority] and that’s why they get shitty. But I’ve known a lot of artists who have bad attitudes—and you feel it when you walk into their shop.”