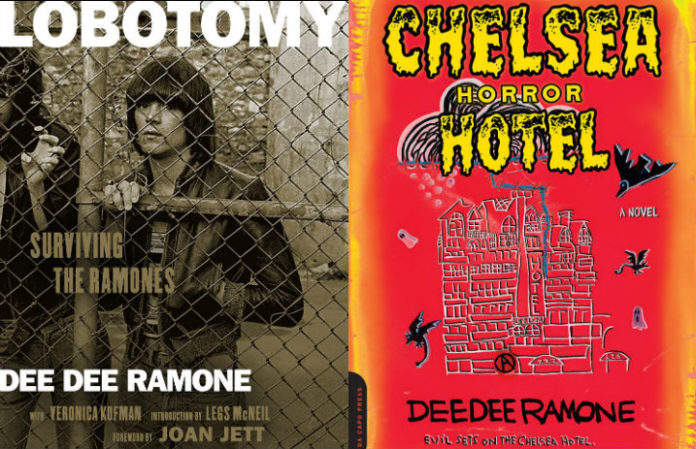 In addition to being a founder member, primary songwriter and bassist in the Ramones, Dee Dee Ramone was a creative force whose work knew no boundaries. Extending his hand to literature, the enigmatic Ramone transcribed the turbulent life of a punk rocker through his self-written books.

Now, Da Capo Press is releasing special editions of two of Dee Dee’s books: “Chelsea Horror Hotel” and “Lobotomy: Surviving the Ramones.” The official release date is March 1, and coincides with the 40th anniversary of the Ramones’ groundbreaking debut album.

“Chelsea Horror Hotel” is a horror novel blurring the lines between fact and fiction with a wild account of a stay Dee Dee and his wife Barbara had in the legendary New York City hotel, while “Lobotomy” is an autobiographical account of Dee Dee’s life and experiences playing with punk pioneers, the Ramones.

The two books were previously out of print and difficult to find, but now they’re returning in wide release with new forewords and new cover art.

Fellow rock and roll hall of famer Joan Jett wrote a foreword for “Lobotomy.” “Dee Dee was the heart and soul of the Ramones,” she writes. “He brought that aspect to everything he did. Dee Dee set the tone for who and what the Ramones were, giving their identity consistency, and setting the bar for what would eventually define punk rock.”

The cover, printed on metallic gold foil, showcases an outtake shot from the photo session for the Ramones debut album cover taken by photographer Roberta Bayley in 1976 on the streets of New York City.

The new foreword for “Chelsea Horror Hotel” was written by horror icon Joe Dante: director of Gremlins, the Howling and Twilight Zone the movie. In the foreword Dante calls the book “Dee Dee Ramone’s phantasmagoric acid trip of a novel” citing “surreal echoes of Naked Lunch” and calling Dee Dee “as mesmerizing a novelist as he was a bassist and songwriter” and “the screaming voice of a punk Lovecraft.”

The new cover art showcases a haunted portrait of the renowned NYC hotel from a painting by Dee Dee Ramone.

Additionally, the two new editions include quotes about Dee Dee from Debbie Harry (Blondie), Richard Hell (Television, The Voidoids) and Jerry Only (the Misfits). The reissues were authorized by Dee Dee’s Estate having been personally approved by Dee Dee’s wife and collaborator Barbara Ramone Zampini and supervised by longtime Misfits and Ramones collaborator John Cafiero (Osaka Popstar) who served as contributing editor for the new editions.

”Dee Dee Ramone’s life was nothing short of extreme,” writes Only. “He was plagued by demons, but created music as if by angels. As chaotic as his reality was, his music was just as brilliant. Dee Dee lived and died by the sword we call rock ’n’ roll. Now let him tell you as only he could!”

The books can be ordered directly from the Dee Ramone online shop or found in stores and online nationwide. Both titles also are available in digital eBook form on iTunes, Amazon, Google Play and Barnes & Noble’s Nook Store starting March 1.

For more on Dee Dee Ramone, visit his official website.