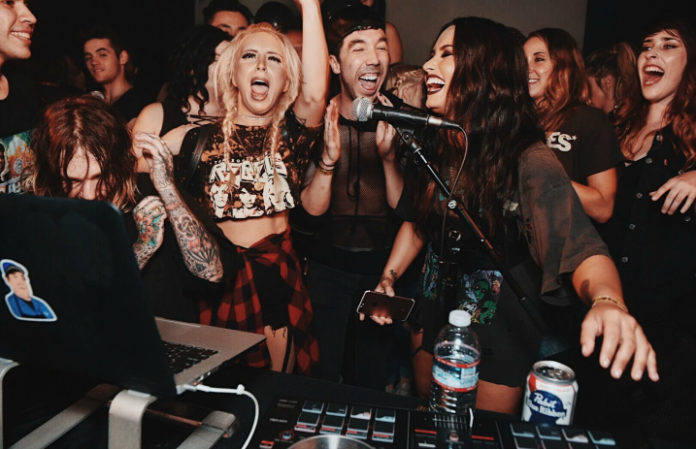 She's confirmed it before, and she proved it last night: Demi Lovato has a great taste in music. She stopped by Emo Nite in Los Angeles last night and sang along to some of our favorites, including Underoath and Paramore.

Check out some of the amazing clips below!

Last night at Emo Nite LA, Demi Lovato, Post Malone and Sirah DJ’d, and when the venue lost sound, Lovato orchestrated an a capella version of “Misery Business” by Paramore, and the footage below proves that she can sing along to some of our favorites '00s jams like the rest of us.

thank you @Sirah & @ddlovato 4 keeping the party going & singing when the sound went out during @paramore at #emonitela! (�� @grizzleemartin) pic.twitter.com/XZnSDcEDiP

Catch a clip of Lovato singing Paramore's “Misery Business” below:

And see her singing along to Underoath's “Reinventing Your Exit” here:

Back in 2015, she shared tweets saying she was spinning Say Anything’s …Is A Real Boy, followed with two tweets about Brand New’s cult classic Deja Entendu, claiming “Sic Transit Gloria” and “The Boy Who Blocked His Own Shot” are two of her favorite songs.

And The Boy Who Blocked His Own Shot by Brand New… Never gets old. Ever ever ever. #throwback

We're just curious to see if she'll make an appearance again—and which songs she'll sing next!

What are your thoughts on Lovato's epic Emo Nite Paramore sing-along? Let us know in the comments below!