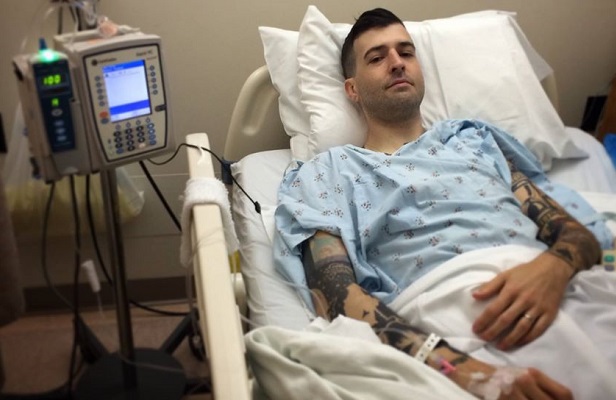 Derek Archambault (Defeater, Alcoa) recently underwent hip replacement surgery made possible by his PledgeMusic campaign, where you can still purchase remaining copies of Alcoa's Thank You EP. Defeater were forced to drop a tour earlier this year due to Archambault's withholding medical issues—likely for the last time.

An update on Alcoa's page reads:

“The surgery was a great success, Derek has already been discharged from the hospital and is safe at home. He is up and walking around on crutches & the physical therapy starts today. All is looking up and it is all thanks to you who donated and helped to push the PledgeMusic campaign.

Here is a photo from a few hours after Derek came out of the recovery room, he is drugged up on plenty of morphine.

Thanks again and see you guys relatively soon!”

How soon? He already has a show scheduled on October 4 with Richie Birkenhead (Into Another, Underdog) and Garrett Klahn (Texas Is The Reason) at Sonny's Tavern in Dover, NH.