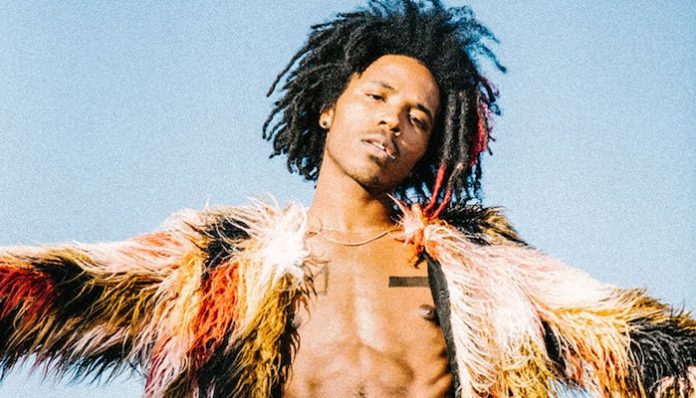 Alternative singer and rapper DE’WAYNE is the latest artist to sign to Hopeless Records. Now, DE’WAYNE is using his voice to address the America he has witnessed in his new single “National Anthem.”

“National Anthem” is not only calling for change in America, but is also encouraging others to fight for their lives amidst the ongoing Black Lives Matter and George Floyd protests.

As protests worldwide continue due to the wrongful killing of Floyd, the Black Lives Matter movement and the need to eliminate systemic racism and inequality are more prominent than ever. For Houston-based DE’WAYNE, however, his new single “National Anthem” is a reflection of the America he has always known.

“‘National Anthem’ represents the America I have always experienced,” he says. “I wrote this song in 2019 and performed it out all over the country on tour last year. I watched beautiful mixed crowds made up of so many different types of people RAGE to this unity.”

Writing the song over a year ago, DE’WAYNE planned to release “National Anthem” at a later date. However, due to the ongoing protests, he felt that now was the right time for everyone to hear the song.

“I had planned on releasing this at a future date, but I’m taking the most recent (and recurring) event as a sign that the world needs this right fucking now,” he says.

For DE’WAYNE, the inspiration for “National Anthem” revolves around his everyday life where he lives in fear of what could happen to himself or his loved ones.

“Understanding what could happen to me or any one of my family members at any time…most days, even waking up feels like a protest,” he says. “What makes things a tiny bit better is knowing that I am not alone in this struggle.”

Read more: AMC anticipates almost all of its theaters to be open by July

Combining elements of rap, rock and industrial, “National Anthem” is an explosive track that is both entertaining to hear and a good representation of what many Americans face each day.

For DE’WAYNE, this new single stands as a call to action to those who are fighting for change. Whether they are fighting in their everyday lives to be treated equally or are one of the thousands of people involved in the ongoing protests, “National Anthem” is for everyone who is using their voice to make change happen.

“Every day, so many of us fight to live our own lives,” he shares. “We fight to live free from judgment…we fight to breathe…we fight stereotypes and we fight a whole bunch of shit that we didn’t choose to deal with. But still we FIGHT. We are the CIRCLE and we are done with this bullshit.”

“National Anthem” is available to stream below.

Prior to his signing to Hopeless Records, DE’WAYNE has shared stages both nationally and internationally with artists such as Waterparks and Anti-Flag. DE’WAYNE joined Waterparks on their FANDOM tour last year and was also featured in a Dr. Martens mini-documentary.

To show support through donations, connect with grassroots campaigns and obtain resources for allies, please refer to the links below.

Help the family of George Floyd here.
Fight for Breonna Taylor here.
Help the family of Ahmaud Arbery here.
To sign petitions for George Floyd, Breonna Taylor, Ahmaud Arbery and more, click here.
Donate to one or more community bail funds for protesters here.
Click here for more resources for protestors, including pro-bono lawyers.
Visit Movement For Black Lives for additional ways you can help the cause.
Click here to connect with leaders building grassroots campaigns.
Here are some anti-racism resources for allies who want to learn more.For other ways to donate, please head here.