Disney has unveiled our first look at Frozen 2 in a dramatic new trailer that will leave you on the edge of your seat.

Take a look at the film’s first teaser trailer, below!

Our favorite ice queen has returned in what looks to be an incredible sequel to the blockbuster hit.

According to IMDb, “Elsa, Anna, Kristoff and Olaf are going far in the forest to know the truth about an ancient mystery of their kingdom.”

The film brings back directors Jennifer Lee and Chris Buck with Kristen Anderson-Lopez and Robert Lopez who wrote the songs for the original movie.

Check out your first look at Frozen 2 below!

We can’t wait for this one!

And can we PLEASE talk about how real that water looks?

Lee previously told Variety that the new film would be “bigger” and “more epic” than the original, while still focusing on Anna and Elsa.

The original film hit theaters back in 2013, pulling in an impressive $1.3 billion at the worldwide box office.

It scored two Oscars and is still listed as the highest-grossing animated film EVER, while also taking the #13 spot for biggest movie of all time.

The film was later adapted into a Broadway musical just last year where it was nominated for three Tony awards.

Frozen 2 is slated to hit theaters on November 22.

Are you excited for the next chapter of Frozen? Sound off in the comments below! 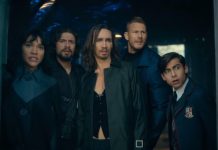 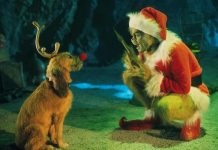