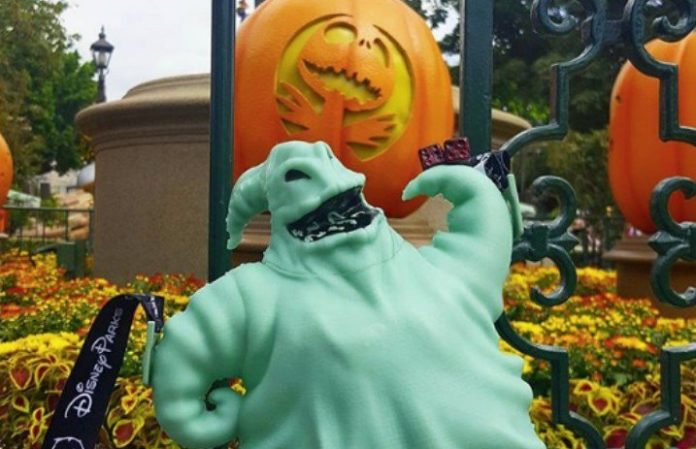 Disneyland has released a new popcorn bucket for their Halloween celebrations, and this The Nightmare Before Christmas souvenir is taking the Internet by storm. The keepsake features the nightmarish villain Oogie Boogie in all his glory, complete with a pair of dice, and it even glows in the dark!

The Tim Burton-inspired buckets are being sold at Disneyland and Disney California Adventure parks, as well as during Magic Kingdom’s Mickey’s Not So Scary Halloween Party at Walt Disney World, but are regularly selling out.

Read More: This ‘Nightmare Before Christmas’ gingerbread house is a Halloween feat of edible engineering

They were introduced to the parks last week, and people are already waiting almost an hour in line—a longer wait than even some of the ride queues—to buy one of the souvenirs that have been strictly limited to two per person, or one each when supplies are running low.

The Oogie Boogie bucket is retailing at $15, but can be refilled with popcorn anywhere around the park for only a dollar. Unsurprisingly, they’re already popping up on Ebay and other second retailers for over triple the cost.

I know I shouldn't be so basic but Im never at the parks and don't own any popcorn buckets AND MY NEED FOR OOGIE BOOGIE IS STRONG pic.twitter.com/IzlKi97x05

I hauled ass all the way across DCA because I heard that they had oogie boogie popcorn buckets over here. Nearly knocked over 3 kids

Disney puts out specialty popcorn buckets throughout the year and in the past has offered other Nightmare Before Christmas shaped souvenirs including a coffin shaped box with Jack Skellington on it, as well as one featuring Jack’s dog Zero.

This popcorn bucket hasn't been Disney’s only souviner to go viral this year. In March, the Beauty and the Beast Enchanted Rose tumbler sold out almost immediately after the success of the live-action film.

Let us know what you think about the Oogie Boogie popcorn bucket and if you manage to grab one before they're gone!