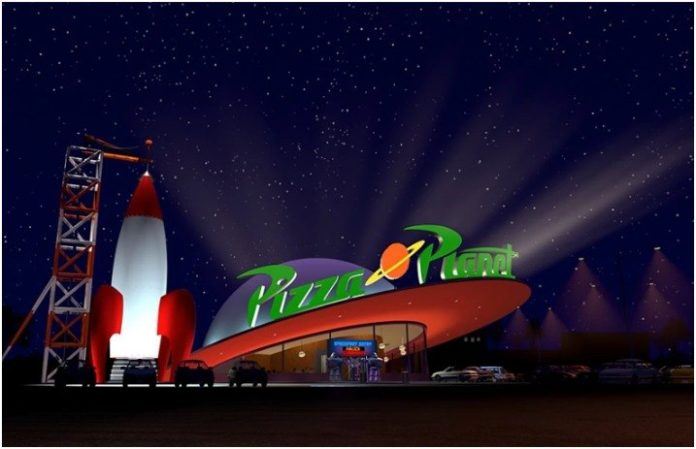 There's nothing worse than watching an animated movie, knowing that the cool-looking places on the screen aren't real-life destinations.

For those Toy Story fans, the worst thing about watching the movie was seeing scenes of the futuristic pizza place, Pizza Planet, and knowing we couldn't actually try our hand at the infamous claw machine. It crushed our young hearts.

Lucky for us, Disney knows just how heartbreaking that is, and to mend our broken hearts, the park has reportedly decided to open up a Toy Story-inspired Pizza Planet, and we're seriously freaking out.

The iconic restaurant is scheduled to open at Disneyland in California, per a report from Disney News Today. According to the website, beginning in April, the Redd Rockett’s Pizza Port in Tomorrowland will be taken out of the park, and in its place will be “Alien's Pizza Planet – A Better Place.”

It's important to note that Disney hasn't officially confirmed the opening of the restaurant, but from the report, an announcement is scheduled to come “shortly.”

They also say that the new restaurant will be themed just like the Pizza Planet from the Toy Story movies. Yet, for those who need a refresher on what exactly Pizza Planet is, it will feature the tagline of “A Better Place,” which was the saying that the aliens in the claw machine would say when they would be chosen by the claw.

The pizza shop is scheduled to happen in time for PIXAR Fest, which is set to take place April 13. But don't get too excited about the park's newest restaurant, as Pizza Planet is only expected to stick around for a limited time only.

While it's only expected to stay for a while, we can only hope that fans of the movie will visit the restaurant so much that the Disney parks will decide to keep the real-life Pizza Planet around for infinity (and beyond)… Don't judge us for our bad use of movie puns.

The news of the Pizza Planet-inspired restaurant follows reports of the upcoming Toy Story 4, which is slated to happen sometime in 2019. While we're not entirely sure when the new Toy Story will hit theaters, we would be glad to eat some pizza at the infamous Pizza Planet while we wait.