It looks like some of Gerard Way‘s villains are appearing in the next episode of Doom Patrol.

The first-look images reveal that the Scants will appear in a new episode of the DC show called “Dumb Patrol.”

Read more: You can now decide who should win Best New Artist at the 2020 VMAs

This week, some new photos from the forthcoming episode “Dumb Patrol” were released, confirming that the Scants are making an appearance. One of the photos shows the Queen of Scants sitting on her throne while surrounded by other Scants.

The queen is in a yellow dress and is holding a cup with a large smile on her face.  However, don’t let her smile deceive you. As we’ve learned before, it’s wise to not trust her. The pink-bodied Scants are known for implanting bad ideas into infected humans. The bad ideas they plant into people are their biggest weapon yet. 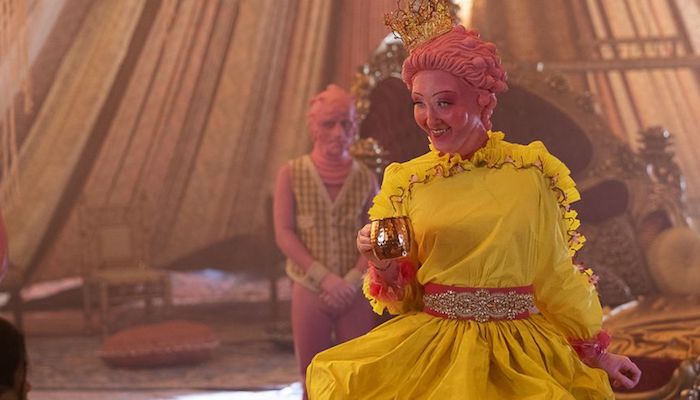 The new episode, coincidentally, revolves around this concept. The episode’s title “Dumb Patrol” alludes to the Scants’ abilities to manipulate others. They have the power of suggestion and commonly place bad ideas into the heads of their targets. Once the ideas are accepted and interpreted as good, those impacted produce a substance from their ears. The Scants then harvest the invisible goop for themselves.

Doom Patrol isn’t the only series to take inspiration from Way’s creations. The highly-anticipated season 2 of The Umbrella Academy hits Netflix on July 31. The official trailer for the new season was released earlier this month and features a new song by Way.

As well, Way is set to appear in a virtual Comic-Con panel on July 25. Nnedi Okorafor, co-creator of LaGuardia, and Matt Kindt, co-creator of BANG!, are also taking part in the panel.

Most recently, the MCR vocalist announced that the Killjoys are back. The Killjoys will, once again, make some noise in a six-part comic book series, The True Lives Of The Fabulous Killjoys: National Anthem. The first issue will be released on Oct. 14 through Dark Horse Comics.

Are you looking forward to watching the new Doom Patrol episode? Let us know in the comments below.