The iconic shoe brand releases new styles commemorating the American headquarters of punk from the mid-Seventies.

Dr. Martens, the iconic British shoe company whose boots helped define the culture of punk rock, is celebrating its 60th anniversary. In typically awesome DM style, the company has chosen to salute the glory of CBGB, the headquarters of American punk since the scene’s nascent beginnings in the mid-’70s.

Dr. Martens has issued its CBGB tribute 1460 boot with two different designs. The first features the club’s legendary logo rendered on the front of the boot, CBGB & OMFUG. (The acronym stands for “Country, Bluegrass, Blues And Other Music For Uplifting Gormandizers,” but there was little of that around when the punks took hold.) 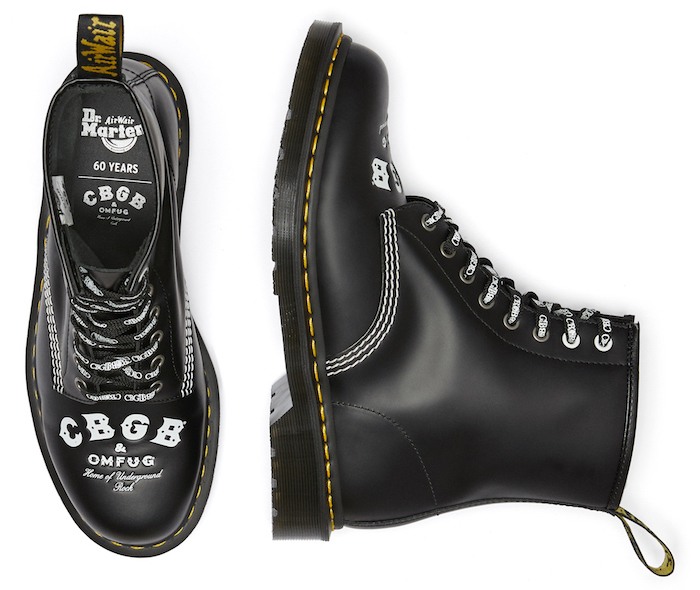 The second design features the 1460 covered in abstract color swatches created from archival imagery from the legendary CBGB and then manipulated to reveal a skull motif.

A representative from Dr. Martens’ in-house design team noted that “CBGB had some pretty cool-looking walls in the toilets, with all the bands traveling through CBGB, adding their own graffiti. This over time has peeled and decayed and revealed bits of interest underneath, creating its own art. We took inspiration from this for the print.” 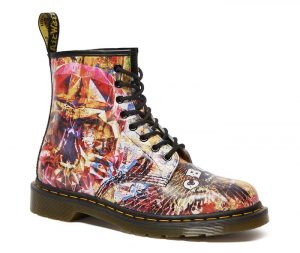 CBGB (also affectionately known as “CB’s”) was located in New York City’s Bowery and is acknowledged as the headquarters/clubhouse for the then-burgeoning punk movement. Such bands as the Ramones, Blondie and Talking Heads built their reputations there in the mid-to-late ’70s. CB’s hosted many of the original ’70s U.K. punk outfits as well, helping the scene gain a foothold.

CBGB’s was the home for hardcore in the ’80s (the Sunday matinees were downright legendary) as the music got faster, louder and (sometimes) meaner. The club also embraced the then-burgeoning indie/underground rock scenes from Seattle grunge icons to antisocial Midwest rockers to the cities’ various music subcultures.

The club ceased operations in 2006 after a rent dispute forced it to close permanently. The space where the club once changed music culture is now a retail front for John Varvatos.

When asked why Dr. Martens focused a line on a club that now belongs to thousands of memory banks, its response was succinct. “It is known as the birthplace of punk rock! Ramones, Blondie [and] Patti Smith, to name a few, have passed through it. It’s stood for people expressing themselves and doing their own thing—which is something we like to encourage and what we stand by as a brand.”

For more details and pricing, check out the Dr. Martens site.