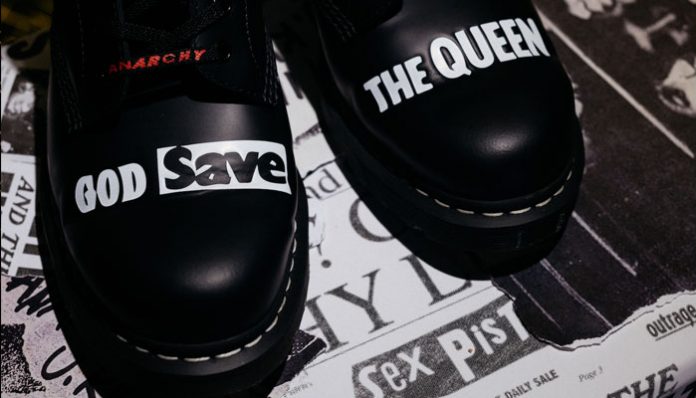 Esteemed British shoe company Dr Martens rolls out another line dedicated to punk icons the Sex Pistols. This weekend, two new designs were released paying tribute to the outrage the band generated in the late-70s.

The first set features their 1460 model boots with the title of the band’s anti-royalty single “God Save The Queen.” Much history has surrounded this song. It was immediately banned from British radio upon its May 1977 release for its charming lyrics (“God save the queen/she ain’t no a human being”). Even the chorus refrain, “no future, no future for you” is an enduring mission statement. Not long afterward, the band were dropped by their then-label A&M. The label ordered the original pressing run of the single destroyed. (Virgin Records put it out when they signed the Sex Pistols.) You could get one or you could buy a new car. Did anyone see that deleted scene from High Fidelity that’s based upon a vindictive wife who owns a copy?

Dr Martens’ other design features their white model 1461 shoe emblazoned with a collage of UK newspaper clippings. The prominent headline, “The Filth And The Fury,” is based upon the British press reaction to the band when they appeared on a talk show. 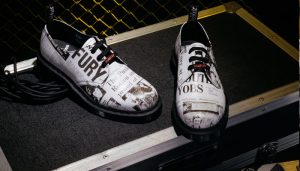 In early 1976, the Sex Pistols appeared on the Today show on Thames TV, bringing some of their friends (affectionately known as “the Bromley contingent”) with them. Host Bill Grundy went in on the band before flirting with a then-unknown Siouxsie Sioux. Then it got worse, with the host purposely goading the band into saying outrageous things. It went off the rails when guitarist Steve Jones fired back at him, calling him “a dirty fucker” and “a fucking rotter” on daytime television. If the Pistols had never played another gig, their place in rock immortality was still assured.

Check out the Sex Pistols/Dr Martens collab here. And if you want to witness the event that took the Sex Pistols to infamy, we’ve embedded it below. Those who don’t know history might be destined to wear it. Or something.