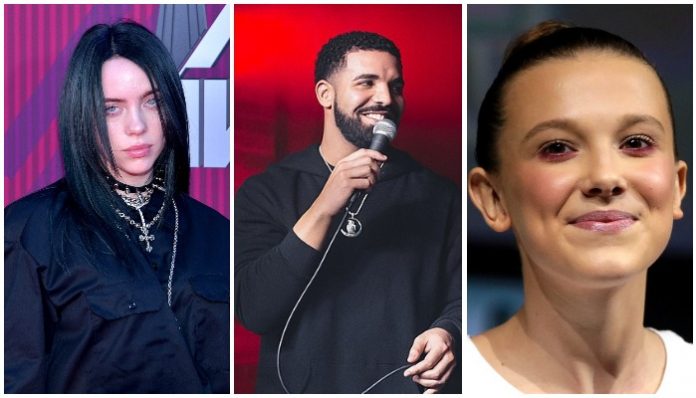 Drake has previously caught flack for texting Stranger Things star Millie Bobby Brown as well as Billie Eilish while they’re underage and after the Toronto rapper surprise dropped two new tracks a couple of days ago, some people think he’s addressing the negative comments about it.

Drizzy ended up releasing “When To Say When” and “Chicago Freestyle” on February 29 and the first track has a line referencing Michael Jackson that has people freaking out.

In “When To Say When,” he says “Michael Jackson shit, but the palace is not for kids / Still women sayin’ it’s childish the way we live.”

This appears like a slight against Jackson who’s infamous home the Neverland Ranch was linked to allegations of molesting minors.

People have been reacting pretty harshly to the lyric given Jackson is deceased and Drake also paid for a feature from him to be featured on a track. Drake has also cited Jackson as a major influence on him in the past.

You can see some of the reactions below.

Drake really addressing the shit of people saying he praying on kids lol…. But why use Michael Jackson as a bar 😭😂

Is Drake really going to bring up Michael Jackson in this song after the shit with MBB and Billie? Is that intentional or?

so Drake wants to drop Michael Jackson p*dophile jokes but spend money on a damn unreleased verse for his last album. that shit is disrespectful af

Drake: “Michael Jackson but the palace is not for kids”

Millie Bobby Brown next time she visits him: pic.twitter.com/BnYsWYBAkg

His relationship to women far younger than him doesn’t seem to start and end with Eilish and Brown though. In 2017, the Daily Mail reported that he was “secretly dating” R&B singer Jorja Smith who was 19 at the time who appeared on his album More Life. He’s refused to comment on the situation, but fans have speculated his song “Jaded” on 2018’s Scorpion—which includes the line “We coulda waited, I wasn’t rushin’, difference in ages / You’re old enough, but you’re still a baby“—is about her.

Drake has not yet commented on whether the lyric was meant to address the issues surrounding him and Millie Bobby Brown or Billie Eilish.

Do you think Drake is addressing the issues surrounding him, Billie Eilish and Millie Bobby Brown? Let us know your thoughts in the comments below.