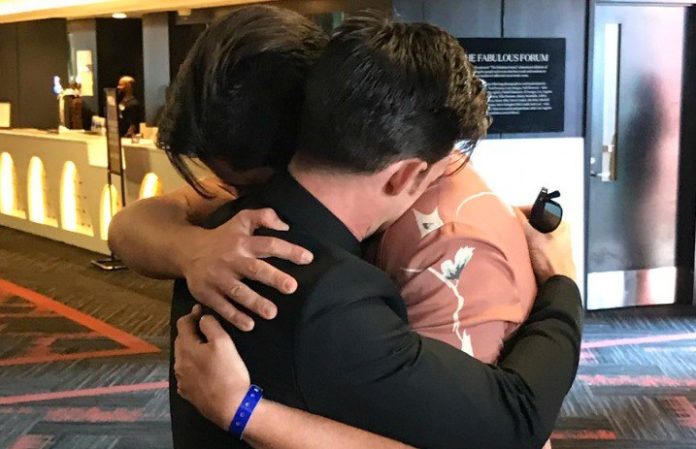 We now know the story behind that beautiful reunion picture of Drake and Josh at the VMAs, thanks to two new videos posted by Josh Peck and David Dobrik.

Read more: Drake and Josh reunited at the VMAs and our hearts are so full

Peck shared a picture of the two brotha's hugging during the night of the VMAs, but thanks to his recently uploaded video, we know just how that picture came to be.

In Peck's video, we see just how a celebrity prepares for the VMAs which includes not knowing what to wear and geeking out over seeing various celebrities. That actually sounds how like we'd prepare for the VMAs to be honest..

Later during the show, we see Peck slowly creep up behind Bell and totally scare him. Peck jokingly says to Bell, “Please tell Facebook to be nice to me.” before Bell responds to the haters telling them to “Lay off!” Afterwards, Peck jokes again saying he has has 100 dollars for Bell.

But the reunion continues into David Dobrik's vlog where Peck totally decides to make his day by letting Dobrik meet Bell. In the video, Dobrik is blindfolded as Bell arrives and doesn't know he's there until Bell sings the opening line of the Drake and Josh theme song. How's that for a surprise?!

Dobrik can't handle his excitement and to be honest, we wouldn't be able to handle it either.

Drake and Josh perform a skit on Dobrik's video showing us exactly what happened after Peck's camera stopped recording their reunion. After Peck tells the camera that there's never been anything but love, Bell remarks that “the wedding looked like it sucked anyway” and that “Mom never even liked you!”

Check out this hilarious interaction between the two below!

So the world is good again as Drake and Josh are friends once again.