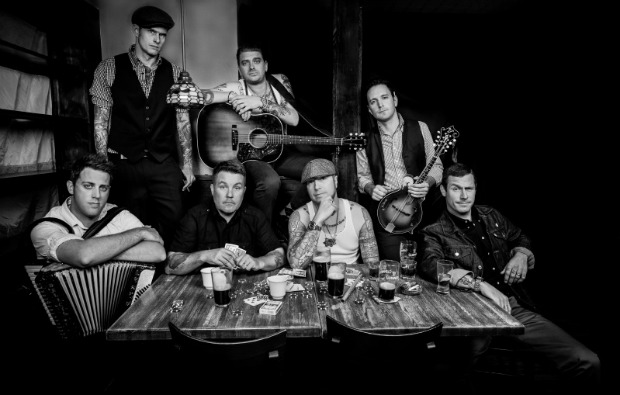 Celtic punk outfit Dropkick Murphys have been nothing short of representatives for their city of Boston for 20 years now. And as we ring in 2017, we will also be blessed with their first new album in nearly four years—the band announced Thursday (11/3) that their upcoming LP 11 Short Stories Of Pain & Glory will come out on Jan. 6. Preorders, including limited edition CDs and vinyl, are already available here.

The Bostonians have also released the album’s first single, “Blood,” with an accompanying lyric video that’s as passionate as the Murphys and their fans themselves.

And if that isn’t enough cool news, Dropkick Murphys will also be heading out on tour in support of the release, beginning in February. The tour will start in Bethlehem, PA and will also make the group’s annual stops in Boston for the week of St. Patrick’s Day. As for support, the Interrupters and Blood Or Whiskey will join them on the road. Tickets go on sale Friday, Nov. 4 and will be available here.

Ted Hutt—who has worked with the band before as well as other acts such as The Gaslight Anthem—produced 11 Short Stories Of Pain & Glory. The album was recorded in San Antonio, TX, rather than their hometown of Boston in order to achieve a change of pace from the band’s hectic lifestyle at home.

“To me, the whole journey starts with the fact we actually agreed to go—and then went—to Texas. Because we've never left home to make a record,” says bassist and founder Ken Casey. “As everyone's lives have become crazier and busier with kids and families, it's gotten harder to buckle down at home. We decided to leave Boston, go down to literally the middle of nowhere and lock ourselves in a room.”

The new record will also continue the storytelling approach and meaningful lyrical content that the Dropkick Murphys have showcased in the past, dealing with every topic from their upbringing, to social issues and life in Massachusetts. This, of course, tied into the fun-loving, brash and hearty attitude that their iconic Celtic punk rock has exhibited over all these years.

The band was also influenced in their writing by their work with The Claddagh Fund, which is a charity established by the Murphys in 2009 in order to aid addiction recovery, as well as children’s and veteran’s organizations. Songs such as “Rebel With A Cause” highlight these hands-on efforts in Boston and New England as a whole, as they hope to raise awareness for those who feel left behind.

However, the most striking track may be “4-5-13,” which was the date of the Boston Marathon bombings, and pays homage to the victims who were affected by the awful circumstances of that day. The band got to know many of those involved when they visited hospitals in the aftermath and have been prepping to write a song ever since.

“Since that day, we felt like not taking the challenge to write a song about what we all went through would be taking the coward's way out,” Casey reflects. “We put more importance on writing that piece of music than anything we've ever done, because if you're going to touch that day, it has to be done right. We went through so many emotions with that whole experience, as did everyone in Boston. It changed the city forever.”

The single “Blood” is available on iTunes, Spotify, Amazon, and Google Play.

Below, you can check out the lyric video for the new single, as well as the full list of tour dates in 2017. Be loud and proud in the comments if you’re excited for the album announcement!

Note: Following the March 18 Agganis Arena show, the band's official after party at House Of Blues on Lansdowne Street will feature the St. Patrick's Clash II Pro Boxing with local hero, U.S. Marine Afghan Veteran and undefeated Light Middleweight Mark “Bazooka” DeLuca (16-0, 10KOs), as well as top local talent and some of Ireland's best fighters. Proceeds from the after party will benefit The Claddagh Fund charities.