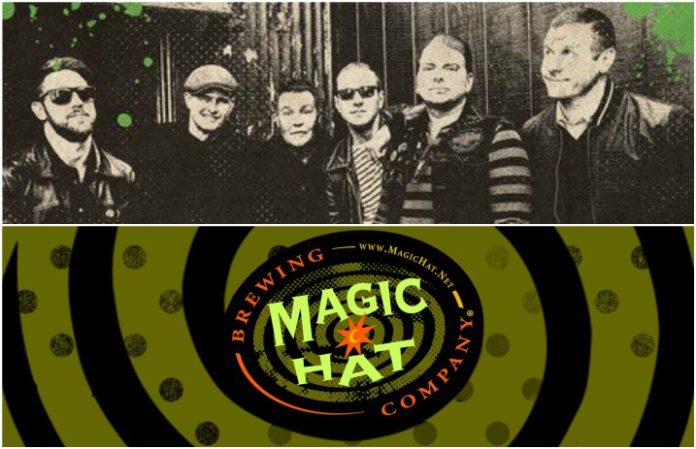 If you're looking for something new to drink this St. Patrick's Day, then look no further. Boston punk-rockers Dropkick Murphys have collaborated with Magic Hat Brewing Company to bring us new “pub ale,” Barroom Hero.

It all began when Magic Hat's brewer met the band after learning about their nonprofit charity, the Claddagh Fund. Soon after, Dropkick Murphys went to Magic Hat headquarters in Burlington, Vermont to try their hand at brewing. The result of their “mutual love of charity and ale” is Barroom Hero.

Barroom Hero is described as a traditional English “pub ale.” It's dark amber in color, “with a roasted coffee aroma that invites the imbiber into a smooth caramel and chocolate malt finish.”

“We all agreed this was the perfect beer to join the band on their upcoming U.S. tour,” says Chris Rockwood, head brewer at Magic Hat. “It’s genuine, with body and flavor. Not another red ale or stout.”

The pub ale benefits frontman Ken Casey's charity, the Claddagh Fund. Created in 2009, the Fund's mission is “to raise money for the most underfunded nonprofit organizations that support the most vulnerable populations in our communities.”

While brainstorming packaging ideas, Magic Hat and Dropkick Murphys both agreed that the attributes of the Claddagh ring needed to be represented: friendship, love and loyalty.

The final label was created by Magic Hat’s in-house label artists, along with tattoo artist Dave Norton of Pino Brothers Ink, an accomplished designer and close friend of the band.

“The Claddagh Fund has become the driving force behind what keeps the band so motivated,” Casey says. “After a while being a musician, it’s nice to have purpose, and hopefully this carries on long after the band’s done.”

Barroom Hero will start shipping later this month, just in time for Dropkick Murphys' spring U.S. tour and St. Patrick’s Day. It will be available for a limited time through the summer in four-packs of 16 oz. cans and on draught.

Dropkick Murphys will be heading out on their St. Patrick’s Day tour 2018 later this month, with support from Agnostic Front and Bim Skala Bim. You can grab tickets here.

^ with Agnostic Front only
* with Bim Skala Bim only

Will you be grabbing a can of Barroom Hero? Let us know in the comments!

Watch more: Tiny Moving Parts share their tips on how to be ‘Swell’