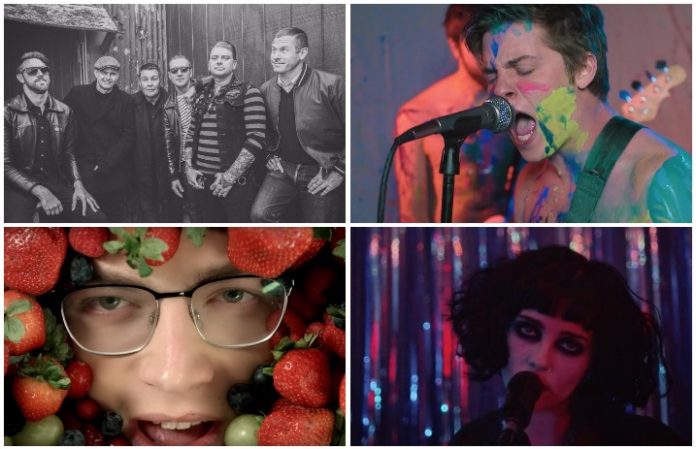 Watch new music videos from Chapel, END, Pale Waves and Plans—plus, don’t miss tour announcements from Dropkick Murphys, LIMBS and Stickup Kid. Check out the news you might have missed today below!

Boston punk-rockers Dropkick Murphys have released tour dates for their St. Patrick’s Day Tour 2018, supporting their record, 11 Short Stories Of Pain & Glory, that was released earlier this year. They will be supported by New York hardcore outfit Agnostic Front and Boston ska pioneers Bim Skala Bim. Tickets go on sale this Friday, Dec. 8, at 10am local time, and you can purchase them here.

^ with Agnostic Front only
* with Bim Skala Bim only

2. Chapel debut tasty new video for “Don't You Love Me”

Indie-pop outfit Chapel have released a yummy new video for “Don't You Love Me” from their recently released EP, Sunday Brunch. They are currently a part of the “Made in America” tour with Waterparks, As It Is, and Sleep On It.

Metalcore conglomeration END have released a music video for “Necessary Death,” from their debut EP, From The Unforgiving Arms Of God. Check out their tour dates below:

Tampa post-hardcore band LIMBS have announced a U.S. winter tour with hardcore outfit Great American Ghost. Their new EP SLEEP is out now via Equal Vision Records and you can buy it here.

Manchester outfit Pale Waves have released a brand new video for their track “New Year's Eve.” The song comes from their forthcoming record, The New Year's Eve, which is available to pre-order on limited edition 12″ colored vinyl here. The band are currently wrapping up their 2017 North American Winter Tour. You can check out the dates below:

California rock outfit Stickup Kid have announced a U.S. tour headlining tour. They will be joined by Columbus band Everyone Leaves and New Jersey rock act Save Face.

Up-and-coming emo-indie band Plans have debuted a colorful new music video for their track “Sunbelt.” The song comes from their second EP, Loose Ends, which you can listen to and buy here.